Back To The Past In Korea 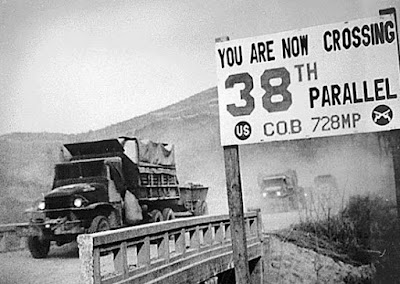 The Korean crisis gives a jolt to the memory. In the last few days of Army basic training it was time for postings to be made known. In the Corps they could be anywhere in the world or in the UK. Some badly wanted to be in the UK for personal reasons, others to be somewhere abroad that was interesting and peaceful.

The place that nobody wanted to be was Korea, anywhere but anywhere whatever the troubles was better than Korea. Not only was it grim, it was the most difficult to get back from at the end. So your National Service could last a lot longer in reality than the two years.

We were lucky, by our time few were going out. But if the rather random choice of who went where had picked on me I might have lived a different life and it would not have been a better one. Now seeing another crisis unfold in Korea is something I could do without.

Especially, as it seems to be yet again a puppet dictator with a big military and wanting to "do something" meets a US demagogue authoritarian President of the "do something, do anything" policy mode. Since the early 1950's and for that matter before how many of these have come and gone?

Then we had a new United Nations that was the means of organising a joint force to go to Korea. But we do not need them any more. We have the generals and political leaders in the bunkers controlling airborne weaponry that will always obey orders and in a time frame, not of weeks or months, but seconds and hours.

What is far worse is that we have two states where at the top the rule and decision making has become chaotic. We can only guess at the power struggles and bitterness at the Court of Kim in Korea and who controls the inputs to him. As for Washington DC the White House has become less of a ruling House than a transit camp for third grade media men.

Our world however is another world and far removed from that of the early 1950's. The networks of globalisation, the prominence of fragile and unpredictable financial systems now central to governments and the dependence on trade, foreign capital and interchange of so many states make any military crisis a world crisis.

History tells us that a combination of a power seeking military controlling a puppet ruler in one place and a confused and ignorant leader who just wants to be admired in another means a high risk of conflict and crisis across a world.