Wake Up At The Back There! 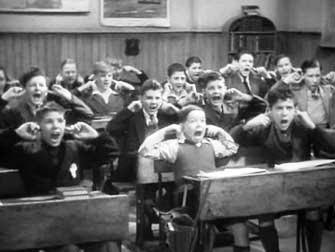 When the previous Labour Government tried to persuade us that equality and all that could be acquired by flinging large dollops of money at the Education system they also went in for some tinkering with the organisation and financing.

But neither they nor the Coalition that followed realised that far more fundamental changes might need to be made and in many respects they only delayed the coming disaster.

The nature of the teacher crisis is a subject in the Huffington Post which suggests that the recruitment of teachers is another "perfect storm" to add to those about to hit the shores of government in the coming years.  There are said to be more teachers but not enough given the criteria for schools today and many leave for other jobs instead of regarding it as a life calling.

Given that teaching is afflicted with management ideology and has changed to meet those rules it must impact on what they are expected to do and to produce.  If the young are "clients" or "customers" and if the product is delivering defined finished human goods according to spec' then this is where you get to.

But given the creation in recent years of sources of information, knowledge and such that are immediately accessible, and facilities for access, contact and the rest to experts and visual modes of instruction and advice, could the whole structure of schools, years, examinations and the rest be now legacies or relics from the past?

More to the point, given the length of school days, I see them going in to start at 9 or after and leaving at 2.30 or so, how much is spent not learning?  Add the time out for holidays the education system has now become an antique, grossly inefficient way of preparing and educating the young.  Then there are the children themselves.

They cannot be the same as the groups of children of the past living as they do in a very different world.  More to the point they are far more varied.  Quite simply, how can a teacher manage to teach by either traditional or alleged "modern" i.e. mid to late 20th Century methods given the children now entering?

We are at the point now where a root and branch change of what goes on in schools, how they access instruction and information, how they provide skills and how they organise the pupils could cover the essential ground in far less time and to better effect.  The social engineering they are supposed to be doing is the kind of work which leaves a car without wheels.

Where do we begin?