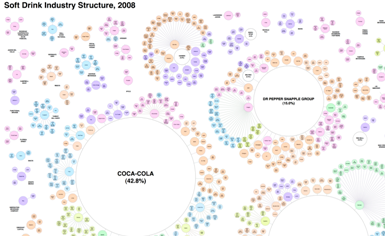 For those of use who have given up on soft drinks out of cans, for cost as much as anything, never mind all the health issues this article, culled from The Big Picture tells us all a tale.

These drinks are being severely criticized by the merchants of health because of the filthy sweetening agents, addictive substances, nasty endocrine effects and alleged role in the obesity plague.

So surprise surprise that they are now vast globalised industries who have bought their way into politics and international finance.

Rather fascinating discussion of the beverage industry from Professor Philip H. Howard of Michigan State University. He concludes there is an oligolpoly, with 3 firms controlling nearly 90% of the beverage options.

This lack of competition in this industry is obscured by the apparent variety of choices. Professor Howard calls it pseudovariety – variations on themes:
“Three firms control 89% of US soft drink sales.

This dominance is obscured from us by the appearance of numerous choices on retailer shelves.

Steve Hannaford refers to this as “pseudovariety,” or the illusion of diversity, concealing a lack of real choice. To visualize the extent of pseudovariety in this industry we developed a cluster diagram to represent the number of soft drink brands and varieties found in the refrigerator cases of 94 Michigan retailers, along with their ownership connections.”

That 89% is broken down as follows:

I am curious as to what % of these are junk drinks using the same cheap, unhealthy corn syrup as their sweetener, versus how many use actual cane sugar.

Scotch and soda anyone?
Posted by Demetrius at 15:30