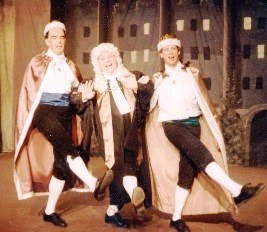 A few days ago I posted a comment on a site concerning the listing of all the major players in the Tax Haven networks. This was to the effect that they and their global financial associates now ruled the world and the governments that are supposed to be elected to govern are only their local accounting clerks.

We are just becoming aware of how little the UK government can actually do now in the way of making and implementing decisions and how little effect the views of the people they are supposed to represent have any real impact outside the occasional media flap.

We are all aware of how large a part the EU plays now in our day to day lives. We are still not aware of how much Labour gave away authority to non government organisations run by appointed cronies. Then there is the “landmine legislation” passed by Labour in its last weeks to disrupt and impair the work of the incoming government.

There are a large number of international agreements which restrain and affect the decisions of the UK government, of which the current debate on extradition is only a small part, however important.

In the meantime financial authority has seeped away with the gradual loss of UK control and ownership of major sectors of the economy. This has gone along with major losses of potential tax revenue to the tax havens.

This has been exacerbated by all the gross wastes in spending, a great deal arising from the surrender of authority by the government. On top of this we are having to bridge the tax gap because no taxes, no spending and borrowing means spend now and pay a lot more later.

All the libertarians who welcome the removal of wealth, profit, income and control from the economy do not realise that it does not mean freedom. It means the movement of control to an unelected and outside power base. This is not freedom or democracy, it is quite the reverse.

It seems that not only is the EU too big and bureaucratic to govern properly, but even the USA can not longer govern itself, especially with big money buying up most of the Senators and Congressmen. Around the world the story is of collapses and attrition of government and the erosion of any real democratic politics.

From a post by Nate Hagens on the Oil Drum web site on August 28 this week that express his concerns about the USA:

Now an insight. This thought has been swirling around in my head for some time, waiting to peek its ugly head above the grey surface. It struck me this week after having some discussions with some Washington DC inner beltway types, someone at the IEA, and someone at the Fed, that there exists no institution that is going to take a leadership role addressing our current problems.

The tea leaves are too disparate and threatening to the status quo. There also is no individual or natural demographic of individuals that on their own can reframe our value systems going forward. At a minimum, it's going to take a) education b) a 'hitting the bottom' moment and c) hard work and sacrifice from people that have the skills and passion to effect change.

But most of the people that are effecting change now are not thinking about the Federal Reserve death spiral in the coming 5 years, and what that implies for social stability and the future of global energy supplies and interconnected trade relationships.

My insight, in a nutshell, is that shouting to the world about the problems, isn't not working because people are afraid, or ignorant, or feckless, but because they don't know what to do. And this especially includes institutions.

As such, my insight this week is that neither individuals, nor policymakers (current) or institutions are going to mitigate the energy/economic/environmental tsunami coming our way. There have to be new institutions, flexible and with urgency, formed to address

a) How to get through the financial bottleneck, and
b) How to move forward with different value systems other than growth/debt based models.

WHERE ARE THOSE INSTITUTIONS??

Well they aren’t here in the EU, or in the UK, or in any other country. The irony is that one of the few countries that might retain some balance is Germany. And guess who wrote the constitution for the Federal German Republic?