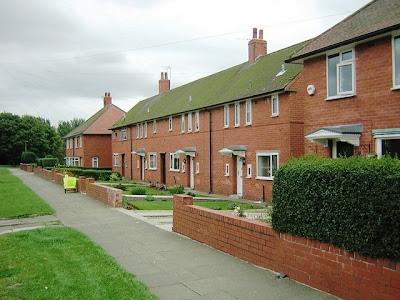 Evicting people from council houses is a fraught and difficult business. If those involved richly deserve it there can still be an undertow of sympathy for them. For any who have done little or nothing to warrant it other than to grow old or see their families depart then it seems harsh and intolerant.

So councils have a serious shortage of housing for families. The costs and time lags in new building mean it could be decades before the problem is met, even if the financial difficulties allow it to happen. Deportation or transportation as in the past is out of the question. So for that matter is 1940’s style billeting where an official turns up at the door to announce the arrival of strangers tomorrow.

A couple of decades ago in the town where I lived there was a debate about the same problem, not enough houses for families. It was a compact town, small enough to walk around and with a predictable population balance.

Then I calculated that there were around 3000 surplus bedrooms in a town of 30,000. In earlier times most, if not all, would have been occupied by sundry wider family or lodgers.

I suspect that now the number of spare rooms has increased because of the ageing of the population, the number of separated couples and more single people living in larger premises. The majority of these will be private properties which leaves only a minority as social housing. In some parts of the country now this will be a relatively small minority at that.

When councils look at its housing stock it will see a complicated picture. A lot of OAP couples and quite a few widows and widowers now alone. Additionally, some singletons in lower age groups will be occupying multi bedroom properties for a number of reasons. In the meantime the effect of New Labour policies has seen a large number of developments of private small flats in towns many of which have a high turnover or are currently vacant.

As the property market and tax and benefits system has been so distorted there is no effective market to ensure that the old and single have to move out and down size to smaller properties. It does happen but often as a lifestyle choice and not the way the market works. Moreover some have more than one property, the result of inflating prices and easy mortgages of the past.

The press have recently had stories about old people having lived with family in a council house for almost all their life whose tenancy has had some sort of glitch being served with eviction notices and this has aroused wide anger, if only because of the question “could it happen to us.”

The anger has been amongst families as well. The prospect of parents, grandparents or other relations suddenly arriving with a couple of suitcases with nowhere else to go has concentrated their minds.

There was one lovely story about two ladies who had been neighbours for six decades and had always been friends especially during their long years of widowhood. They both lived in three bed roomed houses.

The notion that they might have shared one to allow a family to take the other does not seem to have been on the radar of anyone including the local council. It has a lot of OAP voters still in its council houses.

The profligate policies of the last two decades have left us with housing issues that are now very serious and mounting in difficulty.

Whatever policy or action you care to consider has a package of nasty down sides. Whereas for the last decade governments have simply tried to spend their way out of trouble either directly or by gross inflation of the property market, the options now are becoming more limited and have neither easy answers nor popular solutions.

Soon many will be triple locking the house and garage to avoid the squatters coming in. Others will be twitching the curtains looking out for the officials walking the pavements checking their information systems with a coach load of homeless parked at the end of the street.

More will be dreading the call from granny to tell them that the men from the council have been and she will be coming to stay.

And if you Google “euthanasia” or stock up on pain killers at Tesco the rozzers will soon be round.