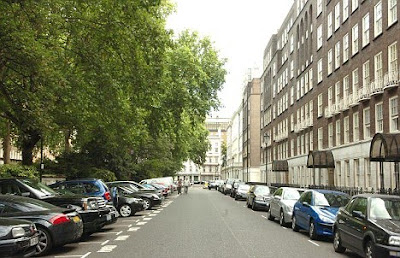 This item below from the Daily Mail yesterday, also in other media, caught my eye because days earlier I had been taking a good look at Lowndes Square arising from background searches for other posts. This was not in 2010, but in 1851, another time and effectively another country

Two Middle Eastern businessmen were arrested after a £180,000 supercar spun out of control crashing into four vehicles, police said today.

Abdulla Saeed Khalfan Al-Dhaheri, 28, and Sultan Khalifa Al-Muhairbi, 35, both from the United Arab Emirates, were held after the smash in Lowndes Square in Knightsbridge, central London, where residents have complained about boy racers disturbing the peace at night.

Lowndes Square is home to some of London's wealthiest residents, among them Chelsea football club owner Roman Abramovich
According to London's Evening Standard, the car, a new £180,000 Lamborghini with only 250 miles on the clock, was on loan from the Italian carmaker to a client. No one was injured in the crash which happened in the early hours of July 25.

The two men appeared at Isleworth Crown Court on Tuesday last week. Al-Muhairbi was charged with dangerous driving and driving with no insurance and Al-Dhaheri was charged with perverting the course of justice.

The men, who are due to appear in court again on October 12, are said to have walked away from the pile-up, telling a passerby: 'It's all right, we'll pay for the damage.'

A parked BMW was reportedly flipped over by the force of the impact. Property company director Siraj Dadabohy, 45, who lives in Lowndes Square, said: 'It's disgusting the way guys come here with blaring music and revving their engines.'

His neighbour Louise Shaw, 37, said: 'They all seem to think they're Lewis Hamilton and don't give any consideration for how much noise they're making. Most of the so-called billionaire “blingmobiles” have Middle Eastern number plates and are flown in for the summer.

For the post on Wednesday, 4 August “In Praise Of…..” on Sir Alec Douglas Home, checking him out, I saw that the Caroline Nesbitt Macan, ancestress, who married RN Captain Charles Conrad Grey was widowed young by 1851. He was cousin to the Earl Grey, the Prime Minister who had brought in the Reform Act of 1832.

In 1851 she and family had moved in with her Mum, Harriet, in Lowndes Square. Step Dad was William Henry Whitbread, head of the brewery firm and a major figure in politics and social reform. He had been an executor to the will of her first husband, Turner Macan, a cavalryman and aide to the Governor-General of Bengal and a leading expert on Asian languages and literature.

He had taken an Egyptian version of the “1001 Nights” to Calcutta for William Macnaghton to produce an Arabic edition. William was another executor and a leading figure in the Royal Asiatic Society. Turner Macan was also editor of the Calcutta version of the “Shah Nameh” of Firdausi. The Shah of Persia and Princes of India had honoured Harriet, his widow.

So who else was in Lowndes Square? Move along a few doors, and there is the Barnsley lad made good. Joseph Locke, one of the major railway engineers, see Wikipedia, who was arguably more influential than George Stephenson. Locke lists himself as first an Engineer and only secondly an M.P. Going round the whole square we have an array of aristocrats, some connected to Court, Pelham’s and such, major City figures, senior legal people and the rest.

Then it dawns on me. The Railways of India were first begun in the 1850’s and critically dependent on finance and expertise from London. And there they all were in Lowndes Square, a ready made network and all the wives and families taking tea together. In the post on Friday 6 August on “The Raj…” I mentioned Auckland Colvin, a major figure in the Indian Civil Service later on, but the son of John Colvin, earlier the Governor of the North West Provinces. He was cousin to Harriet.

So in 1851 Lowndes Square was one of the main locations for the movers and shakers of the period and probably remained as such for some time. Now in 2010 it is home to Russian Oligarchs and the leading suppliers of oil and high rolling financiers.

But these are not British and their interests are not the future of Britain. They are here to move their money about and our politicians have taken their coin and follow their instructions.

Referring back to the post of Sunday, 2 May on “Social Mobility…..” this is based on the Earl and Countess of Antrim and their connections. Jane Emma Hannah, born Macan, is sister to the Caroline Nesbitt Macan above. The post says mobility can be down more often than up.

Here is the twist in the tale.

Harriet’s father, the Rev. Wetenhall Sneyd, when widowed, married again and had family by his second marriage. Unlike the children of his first marriage their futures were not quite so bright and downward social mobility was evident.

The son, Clement Sneyd, had a natural son by one of the servants. His life was in sharp contrast to those living in Lowndes Square. She was found a husband quickly, one of the labouring classes, possibly with the help of a decent dowry.

It is suggested that amongst the lower orders in Hampshire of the period, virginity was hard to find so he would not be alone. As was discipline, this was not long after Captain Swing had been busy and many transported.

When one looks at the present resident families of Lowndes Square and their footballer associates and the rest one wonders how many single mothers there are who have borne their progeny out of hours. They are more fortunate and will not need any dowry or help from the families concerned.

They will be all provided for by our Government and the local councils with decent accommodation in Central London and enough benefits to allow them to have an independent life. You and I will be paying.