Peter Mandelson, Who Do Think You Are? 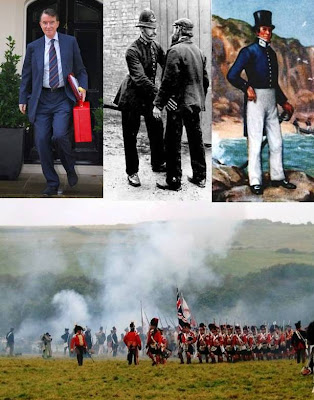 In looking for likely lads and ladettes for their programme “Who Do You Think You Are” the BBC have been quite selective. Despite their concentrating on celebrity names poor old Michael Parkinson was deemed uninteresting, see my post on Tuesday 21 July last. The BBC shies off politicians and any with real media clout if only for the sake of safety and the retention of the regressive license fee.

So I thought I might try a home made version of one for Peter Mandelson. He was born in 1953, so long ago now, I would like to think conceived to the strains of Guy Mitchell’s “She Wears Red Feathers” on the radio. Probably not, in that his mother Mary it is said, as well at teaching him manners, preferred Vivaldi and Telemann. His father was Tony Mandelson, a politician/journalist, and is said to be the one who told him how to break the rules. I wonder which had the greater influence?

There is a possibility that his Mandelson grandparents, members of the Jewish faith arrived from Russia in the period when large numbers were fleeing Tsarist Pogroms of oppression and violence. One of the strange twists that has emerged this year is that Adolf Hitler is claimed to have DNA in the male Y chromosome of a rare kind and which occurs frequently in both Ashkenazy and Sephardic Jews. Does Peter share this ancient line?

To return to more conventional family history this leaves us with the female line. Mary Joyce, his mother, was the only daughter of Herbert Stanley Morrison and Margaret Kent who married in the Hitchin district of Hertfordshire in early 1919. Herbert went on to be a Life Peer Baron and one of the leading grandee’s of the Labour movement firstly as a major figure in London and then in Government.

Herbert was a pacifist and conscientious objector during the First World War and went to work on the land in Letchworth. Presumably, Margaret went to join him when hostilities had ended and he was nearing release. He had already been politically very active before the war. He was born in 1888 the son of a London police constable, Henry Morrison, who on retirement went into the National Call Centre, the early system used by the police and the fictional Sherlock Holmes.

His mother was a Priscilla, the maiden name would need a certificate to be sure but unusual in this context. If a look at the London police is needed and the reality of their work in the central London districts is seen then the Charles Booth Archive of his extensive studies of this period is essential. They knew their patches in detail and Booth gives them full credit. One thing he does mention is that a great many of them were Scottish in origin.

Perhaps their superior literacy, the fact that they were not local and therefore less likely to be corrupted than some of the early force and maybe that many had earlier military experience. Also, it may be that Protestants of a sterner morality were preferred.

But Henry was born in St. Marylebone around 1849 and his early life was formed by HM Customs, where he may have begun his career. His father was a William Morrison and this is the London of the age of Dickens. William married to a Lucy, was a Customs Officer. For me this is where it becomes intriguing.

There was a time in the 1840’s when one of mine, a Master Mariner puts into the Thames. He was a Yarmouth man working out of Liverpool and Dundee with many men from there in the crew. At the same time there is another vessel in the Thames with another of mine, from Greenock but born in Leith is in from South America. Awaiting the pair of them is one of my wife’s, also a Custom’s Officer. What a marvellous row they could have all had, and to think that William Morrison could have joined in.

William Morrison lists his birth place as Gosport and this rings bells. It is highly specific and not just Portsmouth or Hampshire. It brings us not only close to Dickens again who was around there during his childhood but other things. Gosport was a military Garrison and in 1820 the time of William’s birth the 42nd Regiment of Foot were there, otherwise the Black Watch.

This raises a very interesting matter, only a possibility, but one I cannot leave out. For at Waterloo there are two Morrison’s of the 42nd, an Alexander and David. Might one of these be the father of William when they were billeted at Gosport? There is ample material on the web about both Waterloo and the role of the 42nd.

Where William was in 1851 is not certain. But his wife was there and her broad East Midlands accent seems to have caused the Census taker to list her as Marison. But she is definitely the lady in the case. Also her sister is there, unmarried which gives us her maiden name.

It is Sykes, there in St. Marylebone in the time when Dickens was walking the streets of London, that we have a Mandelson ancestor who is one of the Sykes family. Literally, you could not hope for a better name in the period. Bill Sykes, accomplice of Fagin, you may recall, was one of Dicken’s major villains in the book “Oliver Twist”. It does not end there.

For Margaret Kent’s parents there are two key choices, but the one that takes the eye given her unusual musical knowledge and interests little known in this period is that of Ernest and Ellen Kent in 1911. He is a Professor of Music and his father John Kent is with them, aged 71 and born in Gloucestershire, earlier Census records list it as Cirencester.

This is the period when Ralph Vaughan Williams of Downe Ampney, a parsons’s son, nearby was composing with Edward Elgar in Worcestershire, also a son of a musician.

In 1871 John Charles Kent, married to an Elizabeth Emily has Ernest also named Beresford and it all looks very upmarket. His father, John is with him aged 69. Unluckily in 1861 the only likely John Kent I can find that matches is resident in Newgate Gaol.

So on the one side a Sykes and on the other Newgate Gaol. What an interesting background.

But to think about the early Morrison’s, should Alex Salmond hold yet another tribal gathering “Homecoming” in the style of the Scottish fantasies of Walter Scott and Prince Albert of Saxe Coburg Gotha perhaps a ceremony might be held.

Peter Mandelson in his Black Watch Kilt, Laird of Glencairn (obtainable on the internet for a price of £10, a square foot of Caithness buys you a Lairdship) would stride down the Royal Mile to the strains of the Bay City Rollers Greatest Hits.

Like any true Laird, he will have his Tail (entourages to modern celeb’s) made up of Russian Oligarchs, financial advisers, Blair and his security detail, and sundry others to have bestowed on him Scottish citizenship for which he will turn Scotland into the biggest and most bent tax haven and money laundry in the world.

Robert Burns was an Excise Officer and there were Morison’s at Mauchline in his time so all together now for Peter, “Should auld acquaintance be forgot………..”
Posted by Demetrius at 17:33