The Terminator And The Timelords 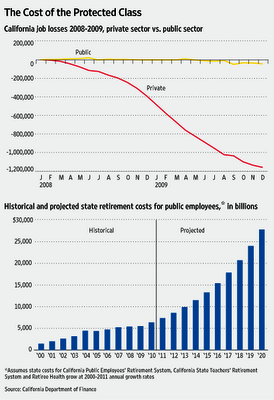 The Terminator is Governor Arnold Schwarzenegger of California who wrote an Op Ed piece for the Wall Street Journal that I have lifted from Zero Hedge. It is about the issues arising from public sector pension liabilities in California and how to tackle them.

The Timelords are the top officials in the UK public sector who have grossly abused their pension schemes taking over something like 10 to 20 times the ordinary pension. To this many be added the way early retirements have been used to allow constant reorganisations, restructuring and changes due to Government legislation.

In the UK the blog “The Slog” has been posting about Civil Service and other public pension funds and the risks and liabilities that have arisen from the way in which they have risen sharply in the last few years with the rise in numbers employed.

The great majority of public service pensions are middling at best, often modest, but laxity over funding in a time of increasing expectation of life has created huge deficits for which the taxpayer is liable.

Times change and people with 30 years service are drawing enhanced pensions for 30 years as people live longer. Assume the payments in are the same, if a £10,000 a year pension is paid on that basis, then there is £60,000 going in and a liability of £300,000. You can see that many of the “cuts” complained about originate in local council problems with the various pension schemes.

California may be an extreme example but it stands out as something that could apply to most public pension schemes in the USA as well as the UK. In the USA in many places state and local authorities are cancelling and defaulting on their schemes.

It could happen in the UK in the public sector as it has in the private. In Europe there are worse problems in some countries. This is what Big Arnie had to say:

Recently some critics have accused me of bullying state employees. Headlines in California papers this month have been screaming "Gov assails state workers" and "Schwarzenegger threatens state workers."

I'm doing no such thing. State employees are hard-working and valuable contributors to our society. But here's the plain truth: California simply cannot solve its budgetary problems without addressing government-employee compensation and benefits.

As former Speaker of the State Assembly and San Francisco Mayor Willie Brown pointed out earlier this year in the San Francisco Chronicle, roughly 80 cents of every government dollar in California goes to employee compensation and benefits. Those costs have been rising fast.

Spending on California's state employees over the past decade rose at nearly three times the rate our revenues grew, crowding out programs of great importance to our citizens. Neglected priorities include higher education, environmental protection, parks and recreation, and more.

Much bigger increases in employee costs are on the horizon. Thanks to huge unfunded pension and retirement health-care promises granted by past governments, and also to deceptive accounting by state pension funds (such as unreasonable projections of investment returns), California is now saddled with $550 billion of retirement debt.

The cost of servicing that debt has grown at a rate of more than 15% annually over the last decade. This year, retirement benefits—more than $6 billion—will exceed what the state is spending on higher education. Next year, retirement costs will rise another 15%.

In fact, they are destined to grow so much faster than state revenues that they threaten to suck up the money for every other program in the state budget. (See the nearby chart.)

I've held a stricter line on government employment and salary increases than any governor in the modern era (overall year-to-year spending has increased just 1.4% on my watch). Nevertheless, employee costs will keep marching upwards because of pension promises, and they will never stop doing so until we get reform.

At the same time that government-employee costs have been climbing, the private-sector workers whose taxes pay for them have been hurting. Since 2007, one million private jobs have been lost in California.

Median incomes of workers in the state's private sector have stagnated for more than a decade. To make matters worse, the retirement accounts of those workers in California have declined. The average 401(k) is down nationally nearly 20% since 2007.

Meanwhile, the defined benefit retirement plans of government employees—for which private-sector workers are on the hook—have risen in value.

Few Californians in the private sector have $1 million in savings, but that's effectively the retirement account they guarantee to public employees who opt to retire at age 55 and are entitled to a monthly, inflation-protected check of $3,000 for the rest of their lives.

In 2003, just before I became governor, the state assembly even passed a law permitting government employees to purchase additional taxpayer-guaranteed, high-yielding retirement annuities at a discount—adding even more retirement debt.

For years I've asked state legislators to stop adding to retirement debt. They have refused. Now the Democratic leadership of the assembly proposes to raise the tax and debt burdens on private employees in order to cover rising public-employee compensation.

But what will they do next year when those compensation costs grow 15% more? And the year after that when they've risen again? And 10 years from now, when retirement costs have reached nearly $30 billion per year?

That's where government-employee retirement costs are headed even with the pension reforms I'm demanding. Imagine where they're headed without reform.

My view is different. We must not raise taxes or borrow money to cover up fundamental problems.

Much needs to be done. The assembly needs to reverse the massive increase in pension formulas to government workers (including already retired workers) that it enacted 11 years ago. It also needs to prohibit "spiking"—giving someone a big raise in his last year of work so his pension is boosted.

Government employees must be required to increase their contributions to pensions. Public pension funds must make truthful financial disclosures to the public as to the size of their liabilities, and they must use reasonable projected rates of returns on their investments.

The legislature could pass those reforms in five minutes, the same amount of time it took them to pass that massive pension boost 11 years ago that adds additional costs every single day they refuse to act.

And after they've finished passing those reforms, they could take another five minutes to pass legislation terminating the annuity give-away they passed in 2003 and ending the immoral practice of pension fund board members accepting gifts or even campaign contributions from lobbyists, salesmen, unions and other special interests.

Reforming government employee compensation and benefits won't close this year's deficit. It will, however, protect the next generation of Californians from overwhelming burdens. The same is true with respect to the other reform I'm demanding, including the establishment of a rainy-day fund so that legislators can't spend temporary revenue windfalls.

All of these reforms must be in place before I will sign a budget.

I am under no illusion about the difficulty of my task. Government-employee unions are the most powerful political forces in our state and largely control Democratic legislators. But for the future of our state, no task is more important.

It will become very rough and unpleasant and the signs are that it will be the ones at the bottom of the heap that will suffer the most.
Posted by Demetrius at 12:45