Out Of Sight Out Of Mind 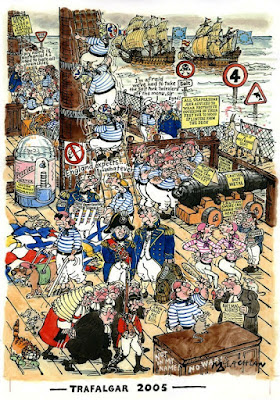 Poor old Nelly, that is Admiral Lord Nelson, 1758-1805, stuck up there on his plinth in Trafalgar Square since the 1840's to keep the pigeons busy; once a hero but is now forgotten and unloved. His statue went up then because after many financial busts and plagues and being kicked out of Afghanistan, we needed a hero.

In the 21st Century his personal opinions on slavery, in line with many of the upper classes at the time are now a cause for expelling him and dumping the statue in The Thames.

The ultimate irony is that had the French and Spanish won the 1805 Battle of Trafalgar and defeated the British, then it is probable that Britain could not have abolished the slave trade in 1808 and then abolished slavery in the West Indian colonies in 1833.

The loss of the fleet to enforce this would mean losing those colonies to other slave owning states. So Nelson in effect opened the way for the anti-slavery movement to succeed. But he was only obeying orders despite his personal interests and connections.

Another grim irony is that during the Battle a good many of the brave men in the sails and on the guns were press ganged, that is simply taken from their homes put on a ship and told to obey or be flogged or hanged.

The cotton or wool in their uniforms would have come from mills in the North of England notorious for their foul conditions, in effect forced contract or debt labour and almost slave labour for children.

There were the unlucky ones passed or sold on from the workhouses and Parish relief officials, oddly enough often run by the mill owners. The energy and basics came from coal mines and other industries in which labour conditions were the same or worse.

Agriculture was the major economic activity. so many labourers were taken for both the navy and the army, there would have been some soldiers on the ships. Some were taken for local militias and then moved on to a regular regiment or in effect sold by their local landowner to the recruiting officers, notably in Ireland and Scotland. If the lord, laird or squire told you to join, you joined.

It took the rest of the 19th Century and well into the 20th Century before the ordinary people of Atlantic Isles gained the franchise and shook off the degrees of servility and forced labour that were a risk to all those thrown out of work, sick or old. If you were an orphaned five year old and told to muck out stables to earn your food then you shovelled for your life.

The trouble with statues of people rather than gods or animals is the people have their ups and downs, likes and dislikes and personal opinions on various matters. Churchill is decried because of his belief in Eugenics, with many of his time.

A leader in this field was Carr-Saunders then Director of the LSE. So when you throw Nelson and Churchill off Westminster Bridge just pop along The Strand and burn down the London School of Economics, despite its changed views on this and many other subjects.

I once believed that if the world learned to play football and took a common interest it could help world peace, OK I was young at the time. And I changed my mind after an afternoon in the old Shed at the West Bromwich Albion ground when they were playing against Aston Villa.

The answer to the statue problem is not to put them up in the first place. There have been peoples and societies in the past which do not like images or statues of people. We have one where they are present every minute of the day.

Nelson was a Norfolk lad with extensive connections on his mother's side. Another Norfolk person with a statue is Edith Cavell who as a nurse was executed in World War 1 by the Germans for helping prisoners escape. Might they have been related, both being the children of clergymen?

Should Edith's statue be dumped as well for her Anglican beliefs and reservations about German foreign policy and Europe?