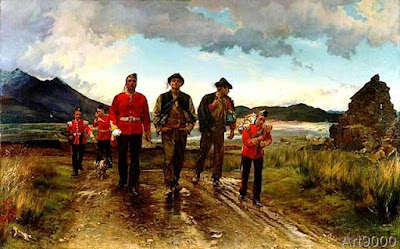 No sooner had I posted about trains when a peerage matter appeared in the papers. The question is what title Trooper Harry might be given on his marriage. Duke of Sussex might be one, but does his spouse want to be known as The Brighton Belle in the media, back to trains again?

The last Duke of Sussex 1773-1843 lived an interesting and complicated life which may not be a good "fit" with what is needed at present. There were also Earl's of Sussex of whom one was the Arthur son of Queen Victoria (and Albert) whose first title was Duke of Connaught.

This Dukedom is being suggested as another option. A delicate issue is that the old province and Kingdom of Connaught is now part of the Republic of Ireland and they are very sensitive about land. It was issues of land ownership and rentals as well as religion that led to their breakaway from the UK.

For me Connaught means The Devil's Own, The 88th Regiment of Foot, The Connaught Rangers, if only because they were in the Peninsula with Wellington. Their bayonet charge at Bussaco sent the French packing and at Salamanca they broke the French lines.

The picture above is the famed 1878 one from Lady Butler with two recruits in Ireland on their way to the army, the Connaught Rangers, fame, perhaps fortune and if they survived a pension to be enjoyed in London along with a job as watchman.

This couple of minutes reminds us of the formalities, albeit not with the 88th, long gone, sadly.

A minute and a half of this is more my style these days, look for the Jerboa on the arm.

Now it is time for a quick march to a cup of tea.