Some Of My Best Friends Were Architects 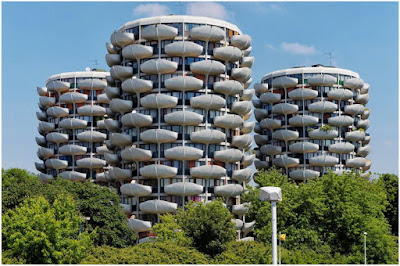 As a teenager in the early fifties a couple of my school mates went to the local School of Architecture so it happened that there was a group of students moving in the same sports and social circles of that time. It wasn't the kind of fifties thing that the London media claim was the norm, life had a rather greater variety then and with real choices.

They were bright, able and ambitious and when qualified moved on to a variety of jobs in the field of architecture. They were among the young architects who found themselves supposed to be regenerating Britain's urban areas and putting up all those buildings and developments that the government were throwing money at.

So what might they have learned at their School and what did their tutors etc. bring to their attention as examples of what might be done besides the basics of their trade? There was certainly a choice among the academics at the time.

One school of thought was that housing etc. and other provisions should somehow be a network of urban villages, but with modern styles, low level and some sort of "community". This may account for those estates of the period where you never knew where you were or where or when the buses were going and are now clogged with parked cars.

There had been the concept of Garden Cities and there are a handful of them still dotted about to remind us. This was a retrospective idea, somehow a clean pretty etc. urban area with drains that worked and running water. But these were more expensive and took a long time to mature which was against the times of the mid 20th Century.

And then there was modern architecture, notably Bauhaus and Le Corbusier and others. If I go into these it would be a long post and you do not have time for that. For choice try the images of Creteil close to Paris in France, above, and other images. I have stayed in Creteil. It was very interesting but daunting. It was not a place to live.

This is the kind of work that so many architects tried their hands at and the kind of living that for many social reformers was the dream of the future. A heaven on earth made of concrete and running to timetables. Only in the UK it had to be done in a hurry, on the cheap, cutting out all the fancy arts and religion and open spaces were a maintenance cost to be avoided. There were never enough lifts and they were never big enough, especially in the brand new hospitals.

In the 60's and 70's the designs often referred to futuristic notions from the 30's etc. One underestimated issue was just how many people might have cars and how much of the movement and delivery of goods might be by motor vehicles. Then there were the contractors.

At my grandfather's knee I was taught when looking for house to go for small local builders who knew their trade and build solidly and well. I managed this with one exception. In a hurry and faced with limited choice we had a Wimpey House.

At parties with our neighbours we did enjoy capping each other's tales of what was wrong and did not work. Whose drains gurgled most, whose doors did not fit, whose windows did not fit, who had the biggest bulges and whose roof space had the most surprises. The fun item was that every outside door lock could be opened with one of three keys.

The unlucky ones were those whose property was so bad that no surveyor would pass it for resale. Worse was when their building society flatly refused to lend extra mortgage money for any needed repairs or rebuilding.

But we could console ourselves. From all reports Wimpey was not the worst, some of the other major contractors were dire. These are the men who put up the social housing of their time as well as the private housing.

It is a very long while since I last saw one of those friends of the fifties. Quite why so many went to live in the country in very old houses or emigrated did make me wonder.