For Whom The Motorway Tolls 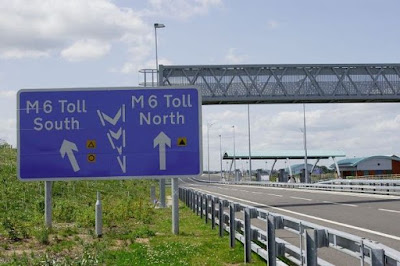 It is in the news that the M6 Motorway Tolls have been sold to an Australian investment group.

The story is here if you want it.   My reaction was that this seems a little odd. What would any right minded Oz want with this scruffy little bit of England?

The tale was a longer one I was told by one of the family. Before it had been on the balance sheets of 27 financial operators. Quite how or why any of this had happened was lost to me as it would be to most people. You might think a toll was a simple basic operation for clear purposes but no longer.

It was December 1958 when the wonders of the Preston Bypass were revealed to the nation. It was intended to stop the notorious traffic jams on the old A6 as it wended its way through the ancient borough of Preston and across the narrow Ribble bridge.

So many went to see it that the traffic jams went from Lancaster to Wigan. As for getting to Blackpool by car, it was quicker to go to Berlin was the old soldier's joke. In time the Bypass became but one small part of the M6 motorway as it ran from Shakespeare country to the border and that of Burns.

There were the usual debates about its use and purpose. Some thought it would be a little used luxury, others recognised that Britain seemed finally to be admitting that the age of the motor had arrived. Among them was the issue of whether it should be "free" or whether a toll be made to contribute to maintenance etc. costs.

This was an age when a flow of cash was seen as just that and when intended for a particular purpose would go to the authority or agency responsible for doing the work that needed to be done. Ideally, the cash from tolls would pay for the longer term costs and improvements as well as the short term ones.

More recently under a Labour government, in 2004 the new M6 tolls gave rise to political argument but by then cash was looked on with eyes of envy by financial operators who see it not as there to pay for something to be done, that task should be loaded onto others, notably taxpayers if you could get enough politicians drunk, if only on power, to agree to it.

The cash would become an asset and a base for credit and in turn operations in the many and various markets for trading and lending and lending and trading. The M6 is not just a road from here to there it is a desirable instrument wherever the financiers operate.

So as you wave the latest edition of your credit card over the thing at the entrance you are setting in motion a flow of money movement through the world from the Caymans to Hong Kong and Sydney and incidentally letting GCHQ at Cheltenham know that you are off to see grannie again.

It is not exactly a highway to heaven but it is as good as you are ever going to get. The bell tolls for thee.