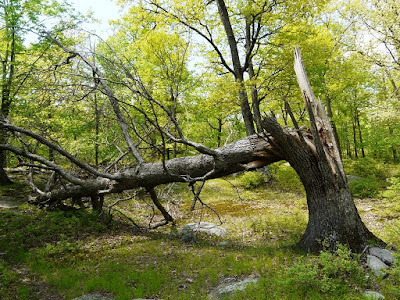 One of the great works of the past is the Rev. Gilbert White's "Natural History And Antiquities Of Selborne". He lived from 1720 to 1793, in rural seclusion in Hampshire but noted and commented on the immediate life about him, notably plants. His book has a web site and you are welcome to read it.

Yet he lived at a time when there was a magic money tree, MMT, and could not fail to be aware of what happened. If asked he might have advised that trees are fine when in full growth. But they can be chopped down, catch diseases, through their seeds create dense and impenetrable forests and be costly to maintain. Also, sooner or later their fruits run out.

In the Middle Ages the monasteries became the MMT's of their time. Then King Henry VIII, advised by Thomas Cromwell, and needing serious money to build, decorate, run and maintain his new 34 palaces; he might have called it infrastructure and job creation, nationalised them.

This induced a collapse in the economy. The monasteries etc. were at the centre of the wool trade, a major part of the economy, and critical to the foreign trade at that time. Also, they were the medical centres, education providers and retirement homes.

The ensuing land grab created new magnates and landowners and in the next century absolute monarchy went as well. This was because King Charles I, following the example of his father, King James I, subsidised the arts and spent heavily, only to lose his head.

It is possible to see MMT's in money economies as long ago as the Emperors of Rome and in other parts of the world, the Chinese Empires and those of say, the Mughals. There is always the question, what happened next?

This ten minute cartoon tells the tale of John Law in France at the beginning of the 18th Century in simple fun terms.

This three minutes of satire deals nicely with our very own British South Sea Bubble that enriched so few and impoverished so many. When the question arises about the 17th Century Tulip Mania the answer was it could never happen again.

The 19th Century was a period of one crash after another across the world all involving the search or believed findings of MMT's. See Wikipedia on "Long Depression" and "Baring crisis". This was central to the imperial policies of the European countries as well as both the militarism and nationalisms of their time. My posts on "Gold Fever" of 4 January and 2 May 2016 refer to these.

But my favourite MMT for personal reasons, I am proud to be Nesbitt, goes to that of the 1770's. The man was Arnold Nesbitt and there is a telling biography of him here read down  on the History of Parliament web site, Research, Members, as he was an M.P. along with his close colleague Sir George Colebrooke. It is strange how so many M.P.'s are involved in so many financial crashes.

It is my view that the Colebrooke and Nesbitt crash of The City in the 1770's cost us the American colonies. There are differences of view about this being a good or bad thing. It involved in particular the East India Company which meant that the effects hit almost everyone with wealth. It leads us inevitably to Jane Austen.

Jane, who lived at Steventon along the road from Selborne, had a close friend with a shared interest in exotic plants. She was Emma Colebrooke who had married Charles Bennet, Earl of Tankerville. Emma was the daughter of James Colebrooke, brother of George above.

One of the features then of the interests in plants was not simply as ornaments but in an age before synthetic chemicals their potential for profit as medicines or colourings or flavours. These Nesbitt's were family and close connections with the Sneyd's that Jane did know. Jane was certainly interested in money and how much men were worth, in any case a brother was a banker.

Coming to the present via a complicated story of family histories we end up in the Liverpool of the Deputy Leader of the Labour Party, John McDonnell, a recent convert to the idea of planting an MMT to save us all from inconveniences, such as paying rents, repaying loans or counting the pennies. His Marxist beliefs would seem to contradict this, but there have been a number of nations recently who married Marxism with an MMT only to collapse into poverty and social breakdown.

There has been a row over John's education, he was at the De La Salle secondary school, whose alumni include Wayne Rooney but before that alleged to be at a high fee paying "prep school". This is a nonsense. The place he was at was then an RC seminary where many were called for the priesthood but few were chosen. It would only take a forbidden trip or two to the cinema etc. to miss the cut.

But it is possible that the Parish Priest who first recommended John was of a family linked to the McDonnell of McDonnell Earls of Antrim.  Also, John's grandfather at one time lived a couple of hundred yards away and in the same parish as the grandchildren of a Kavanagh of Carlow. In 1851 Morgan Kavanagh of Carlow was sharing a house with Karl Marx.

So when John changed from one faith to another the leap was not as long as you might expect. Moreover the connections go back to people close to and related to Arnold Nesbitt, creator of one of the great MMT's of modern times and the one which arguably went most spectacularly bust.

But John's MMT for the huddled masses and students also depends on rich people paying their taxes, admitting their liabilities and eschewing the off shore and other schemes.

In fact, he will have to persuade his fellow alumni Wayne Rooney and his associates, who recently lost a court case to the HMRC, to pay more tax than in the past.