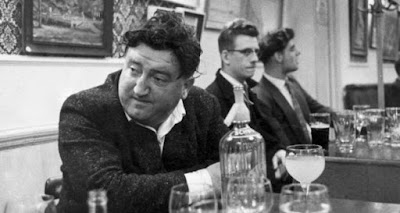 One of the accidental meetings made with many people was the time I met the leading Irish republican writer Brendan Behan, 1923-1964, at the end of the 1950's. Inevitably, it was in a bar when I rolled in for my evening rehydration. He was supposed to be somewhere else but had been overcome by thirst and just went into the nearest bar.

It was a private student and not a public bar but the barman feeling that discretion was the better part of valour served him and his minder. The others in the bar stayed clear and looked sideways out of their eyes. Behan might mean trouble.

Ever one for an interesting chat I had a conversation with him about Dublin pubs, it was not long before when I had visited Davy Byrne's and others there on a trip down to Bantry Bay and Mizen Head. His minder managed to persuade him to go to the occasion to which he had been invited so it was but a short meeting and instructive.

This article at 50 years after his death is from The Skibbereen Eagle gives an idea of the man and Wikipedia has a page on him. The memory arises from the final part of the Sky Arts series "Portrait Artist Of The Year" when both the subject Graham Norton, and artist in question were Irish and down at Bantry Bay.

It was The Eagle which famously warned Tsar Nicholas II of Russia that his foreign policies were ill advised and potentially disastrous. St. Petersburg took no notice and the world descended into chaos with dire effects for all those involved, notably in Ireland.

There has been a death in Ireland which reminds us that the issues have not been resolved. But they never will be because as Behan recognised their republican movement had moved on from being Irish to being another branch of international Marxism and never ending dispute.

The picture above is Brendan Behan at The Fitzroy Tavern, another place I have visited a few times. The irony here is that it is on the home patch of George Bernard Shaw in the late 19th Century.