Changing The Course Of History Again 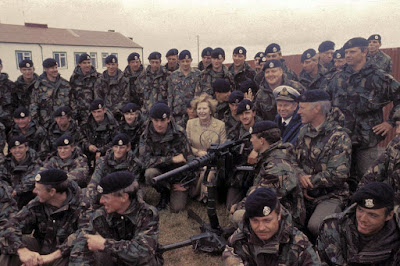 Wandering the web can turn up all sorts of things. Most of it may be trivia but now and again something can catch the eye. Which brings me back again to Mrs. Thatcher, her life and times, and the things we have forgotten or not noticed.

This clip from  the Lincolnshire Archives is a two minute item about the Kesteven Training College For Teachers in 1961 at Stoke Rochford Hall. Almost quaint, it is another world from this one inhabited by a what could be a different species. It was just down the road from Grantham, her home town.

A few years later it was designated a College of Education, only to be closed down as such in 1978, in the great purge of the local and the religious from teacher training of that period in the name of progress. It did not become such a college until after the war when massive investment was made in recruiting teachers to meet the population boom and a later leaving age.

During the war it became for a period the base for the 2nd Battalion of The Parachute Regiment, so Miss Margaret Roberts, as she then was, would have been all too aware of their local presence. So when Maggie takes off for Goose Green in The Falklands in January 1983 she is no stranger to the Battalion. She had seen them go off to Arnhem, in particular.

Because it was at Stoke Rochford Hall that the Arnhem assault of 1944 was planned and where the likes of Urquhart, Montgomery and the others sought to plan the critical breakthrough to get the tanks across The Rhine before winter struck.

Back in 1954 there is a newsreel clip on Youtube of the celebration of the 100 years of the Aldershot Garrison of several minutes. 2 Para are on that one and I recall them well, being in the next barracks to theirs in that year. Charming chaps, so long as you did not give offence, and they were very sensitive.

Which brings me back to the career of Margaret in that period. After Oxford she went into science, but and the big but then was in that period as a female she was all too likely to be a glorified lab' assistant for the rest of her career. She decided to go into politics.

But what if she had gone into teaching? There would be have been jobs a plenty for a well qualified etc. science teacher in the girls grammar schools of the period. If later had she thought go into lecturing in teacher training she would have been a good candidate and with decent prospects at that time.

In a college like that of Kesteven at Stoke Rochford, along the road from Grantham, it might have been ideal. Until, of course, the Labour government urged on by its Marxist elements closed it down and put her on the jobs scrapheap of the period.