When Is A Budget Not A Budget? 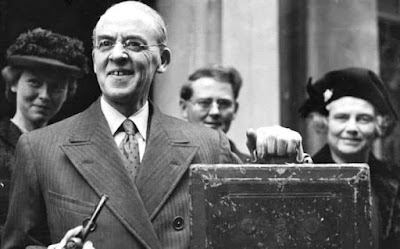 The answer to the question is when it is a Treasury Budget. There was a time when the nation would be huddled round the wireless sets listening to the great and learned of the land, say Sir Stafford Cripps, telling it what we were in for.

Afterwards misery would enfold the nation for days and weeks until the blows fell and then the complaining would begin. Cripps was the Chancellor of the Exchequer in the Attlee government from 1947 to 1950 taking over from Hugh Dalton who resigned after unwisely trusting a journalist.

Early in the war he had been Ambassador to the Soviet Union and then sent to India to sort things out, in 1945 he became President of the Board of Trade in the high days of nationalisation. His legal, political and Church family were a leading one and he was related to Beatrice Webb. He was seen as the ultimate travelling expert.

The Tories who in 1945 had been consigned to the dustbin of history clawed their back with promises to change not quite all of this but enough to collect the votes of all those who felt that they had been dunned and asked to pay the costs of war as well as all the Attlee's government's flights of fancy.

Essentially, the Cripps mode of operation has set the pattern since then but the world has moved on. Whether the why's and wherefore's of The Treasury have is another matter. They have some very expensive computers and systems but they seem to take us no further than in the days of Cripps.

Bluntly this antique business of an annual Budget decreed on high and politically for all time that is until the next crisis or calamity, say in six weeks, is just a left over political con job to pretend that the politicians are in charge. The Budget caper now is a bit of knock about politics to keep the media moving.

What should a government do to convey its finance and taxation policies to the public at large and to the world in a real sensible way? The kit that the Treasury has been given ought to be able to keep a running tab on the bulk of things. Beyond that are regular and occasional summaries.

How many per year is arguable and in what form the information sets should presented for policy decisions and changes is another question. The basic political problems are when it becomes clear that previous policies are not working and issues where hard decisions and losers are needed, usually evaded unless they are either easy touches or generally disliked.

Additionally, there are too many key influences on The Treasury via linked financial corporations, lobbyists, party fund contributors and overseas magnates and political leaders all of whom want the less said the better and the less tax burden even better.

How this lot can be reformed is a herculean task or more like something that happens after a major crash or crisis.