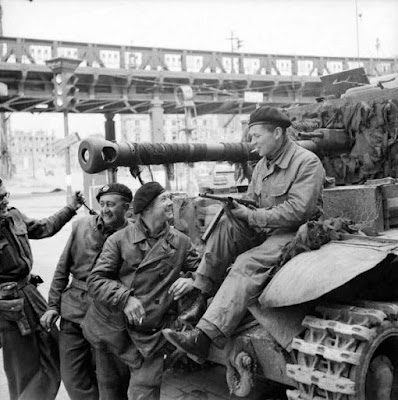 A few days ago BBC2 screened a two part series fronted by Mark Urban on the part played by the Fifth Royal Tanks of The Royal Tank Regiment.  Among the first armoured troops to go to North Africa they were part of an elite who went on to be in the Normandy Landings in 1944 and then to northern Germany at the very end in 1945 (picture above in Hamburg).

In the desert smartness was a low priority because of other needs and demands.  Given the conditions, the nickname "The Filthy Fifth" reflects typical squaddie humour of the period.  It may come as a surprise to some that the men of that time in the services had their own ideas about a lot of things.

The Regimental March is the old song "My Boy Willie" and words I recall were "It wasn't the Yanks who won the war, it was my boy Willie, never been in a tank before.......".  It is a fine tune to march to, been there, done that, a few years after the war with a divisional parade.

It was a squadron of The Filthy Filth who were there to march to it, then one of the units in the 7th Armoured Division (Desert Rats) stationed in Northern Germany as Cold War Warriors.  They had joined the Division before El Alamein and were with it until the end, the Division being disbanded in 1958.

The two programmes in the series are mercifully quite straight forward avoiding all the usual bank crash wallop favoured by documentary makers these days.  The horrors are the realities of tank warfare and there was more than enough of that in the various campaigns involving 5RTR.

One part that was discomforting to say the least was at the very beginning in the first years of the war.  The regiment, like all the other tank units, was equipped with tanks that were grossly inadequate, under powered, under gunned, unsafe and unreliable.  If Willie had not been given American tanks later we would not have had an armoured force left to fight.

How was it that the mighty intellectuals of the civil service, the generals of the high command, presumably the intelligence services and not least the politicians, were unaware of the capability of the German tanks and anti-tank artillery?  If they were aware why did the Army finish up with tanks that were a liability?  Later there were better tanks and guns, but still inferior to the German.

Even the tanks that were produced it seems were poorly made, more being lost in breakdowns often than were destroyed by enemy action.  Was it simply bad workmanship and if so how was it in the chain of production that such unreliable products were sent out for men to die in?

This is before you have the outlandish tactics at first adopted by a general staff who did not understand armoured warfare.  What were pseudo cavalry charges must have made easy targets for the superior power of the German guns.

It seems that for the first British tanks to have a chance of knocking out a German one, they had to get a to a couple of tanks length for their shells to impact on the German armour.  Typically, it was the men who were blamed and not the failures of supply or command.

What worries me is looking at the government of the present and for that matter the opposition, the situation today seems to be just as bad, if not a great deal worse.

We are being given cheap propaganda, lies a plenty, seriously substandard services and no effective planning for the future in a dangerous and demanding world.