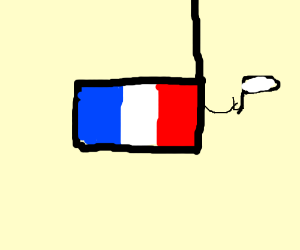 With all the noise about the continuing crisis at Calais, there is one matter that should concern all.  The Calais Dover rail and sea links are one of the crucial trade and communications junctions in both European and World trade.

Yet the French authorities, they cannot be called government, have failed to cope with a small number of disorganised but determined individuals either each alone or in groups.  They have been given literally the run around by them.  Their answer is to blame anybody and everybody else.

This is the standard response of the incompetent and foolish who have either made major blunders or who lack the capability and intellect to deal with even relatively simple problems.  One possible reason is that the French pay too much attention to intellectuals and too little to the practical application of mind over matter.

To all intents and purposes and looking over the full range of activity France has become a failed state that cannot see its own failure or begin to understand why it has happened.  So its leaders puff and posture and engage in the sorry dirty and corrupt politics that has been its downfall.

To fully examine this would take a big book covering many fields that might begin with the time of King Louis XIV and take in three centuries of history.  In journal or blog form it could run to one of those very long items that you might just put off reading.  So this is short and blunt.

There was a time when France could claim to exercise leadership in both Europe and the World in many respects and it was common for many in America, Britain and many other places to see Paris as the place to go to inform the mind and see the future.  Now it is just another tourist dump with low grade government and financial facilities located there as a legacy of the past.

In 1789 the French revolted against an entrenched monarchy and elite that was European in scope and connections.  The French saw themselves as prisoners in their own country and serfs to rulers who were unaccountable and held them in contempt.

In 2015 France has allowed itself to be governed by an entrenched political and administrative class and controlled by a European intellectual elite that is unaccountable and dictates the rules and styles of life.

It is a pensioner of the EU, its agriculture depends on vast subsidies, its industry on state contracts and its investment on state spending fuelled by debt that is out of control.

In many ranges of human thought and activity at one time France was among the leaders of the world in science, the arts, literature and other fields.  This is no longer the case.  There are still a number of able and notable people but the French are now rarely leaders they are mostly followers and in some cases are a long way behind.

It is not that France is trapped in its longer past.  That is long since gone and is history.  It has allowed itself to be taken over by a creature of its own creation, the EU.  It assumed that because of history and its central role it could always be the final authority in the EU.

But then the EU expanded and in doing so distributed power to others who looked elsewhere for leadership.  The Euro was introduced and the Germans put the War behind them and took over the reins of power having the money and political direction to do so.

By promoting the expansion of the EU and the Euro and the rest of the control systems as well France has fallen into the trap of its own making.  Intended to curb other major states and notably Britain, France is now subsidiary to others and paying the price.

It's internal politics have long been corrupt and a severe hindrance to good government.  If anything Europe has worsened this to the point where it is so extensive and necessary for function that France's major decisions depend on it.

So there is employment protection that almost guarantees unemployment.  A benefits system for the least deserving.  And administration that does not administer and a legal system that protects crime and criminals.  Then there is all the debt and to whom it is owed.

It has long been a joke about France that how can you govern a country with 400 Cheeses and 1000 variations of these, all distinctive and with strict rules of production.

But the EU now rules that powdered milk can be used.