The Father Of The Nation 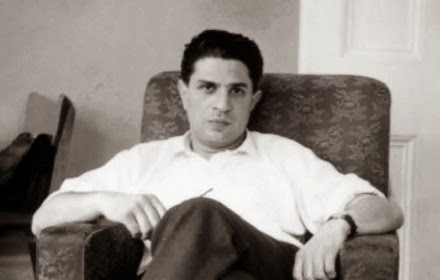 With the Labour Conference in a fog at Brighton, I wondered whether to simply put up a post about the old folk and cavalry song "Brighton Camp", but it did not work.

So I am forced to consider the meanderings of Ed Miliband and the swathe of media and web comment about his attachment to old style socialism.  Among this has been reference to the intensity of his, and his brother David's, upbringing in a socialist household.

The reason that Ed is leading the Labour Party is because he swung the Union vote and that was because of his believed commitment to Socialism as it ought to be, that is the form that his father Ralph Miliband, above, swore to uphold over the grave of Karl Marx.

But I remember Ralph and from the time before his sons were even a twinkle in his eye.  At the LSE as a young lecturer he was regarded by some as being on the doctrinaire side.  The word among the sporting fraternity was that to be in Ralph's class was drawing the short straw.

At the time there were several schools of economic thought there, although explaining this involves some heavy duty reading.  The Wikipedia pages on Welfare Economics and Pareto Efficiency give a simple introduction that is far from simple to one that had quite a following in the period.

When Ralph went up to Leeds in Yorkshire in the 1970's he was moving around some of the same socialist salons as that rising star of the Left, Arthur Scargill, who tried to start a class war and lost.

Nowadays some of my thinking is on the lines of this comment made on an economics blog, quote,

"If an economy is made up of myriad flows of activity which we attempt, with little success, to measure by money counts, then it is likely to be a constantly changing entity where the future is unlikely to be predictable on the basis of even the recent past.

So which flows matter most and which will be critical in the futures? Given that economists and politicians have been a hapless bunch of chancers even in free market conditions, what hope is there for various forms of command economies?"

What is frightening is the same as what was scary in the 1950's and during the decades after.  It was that the socialism on offer was always one from a earlier generation.  In its perverse way it was an ultimate form of conservatism.

This was certainly the basis of a lot of the problems of the 1960's and 1970's when the Unions were desperately attempting to keep an old and failing economy as it was in order to preserve the jobs and their own status.

The lesson from the Party conferences and especially the Labour one is that none of them understand the world we are in and the kind of world we are headed for.

Perhaps they should follow their Dad's example and go up to Highgate Cemetery to swear at the grave of Karl Marx.


He once was seriously in debt because of buying large quantities of cigars on a cheap offer.