More Football Crazy - A Blast From The Past 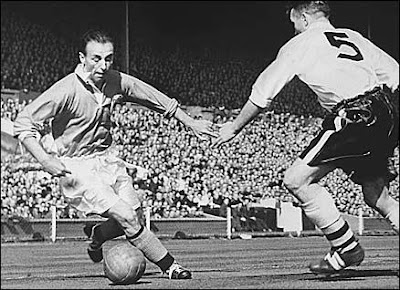 There has been some fuss over footballers and managers and their personal interests in the media, giving us all a little light relief from politics and related insanities. One aspect of this has been the usual contrasts with footballers of old and how those of today are far removed from the sturdy reliable low paid plebeians of the past who played simply for honour and the respect of their community. One of these heroes is Sir Stanley Matthews upheld as a shining beacon to the allegedly less worthy men of today.

However, there is a story in the “Independent” about how in 1945 Stanley Matthews, then of Stoke City, and Stan Mortensen of Blackpool serving in the Royal Air Force fell foul of authority in trading rationed and scarce goods illegally on a visit to Belgium. The played in a friendly match where England international players met a Belgian team as part of the hearts and minds approach to the newly liberated countries. The story has a gloss in that it seems to be a couple of footballers trying to add a bit to their incomes by engaging in deals in matters of little importance.

For those of us who were around at the time and learned nothing of this either then or later all sorts of bells start ringing. The pair were both Corporals in the RAF based in the UK and managed to play a great deal of football during the hostilities. They were questioned by the Special Investigation Branch, the SIB, given a severe reprimand and returned to their units. The legend was that they had made only £16 on the deal and that had been spent on their wives. The wife of Matthews, Betty, ran a hotel bought possibly in the late 1930’s, in Blackpool.

This was March 1945, days after Dresden had been bombed and Iwo Jima taken by the Americans. It was after a dreadful winter and the aftermath of the Battle of The Bulge in The Ardennes. Later in March the major crossings of the Rhine were made at Remagen by the Americans and by the British Commandos near to Cologne and Wesel. So what was the contribution made these two? They were turning out in a demonstration match and flogging commodities that were scarce and very valuable at that time in a jewellers shop on the basis of their celebrity.

The coffee and soap is likely to have been misappropriated from American military stores in the first place and the likely value substantially more than that stated. I recall that I did not see real coffee until the 1950’s and for most people the soap available was very basic. Commodities like this were almost in the nylons class.

This kind of dealing then was a serious criminal matter. An ordinary serviceman caught red handed could expect a spell in a military prison which would have been one of life’s least happy experiences. A guilty civilian could expect months or years in prison depending on the severity of the offence and the attitude of the Bench. The outfit I was with later had a number of interesting people so I spent many hours talking to the SIB about various matters. It was certainly a learning experience. Matthews and Mortensen seem to have been given a very easy time. Their “punishment” was the least possible; they both retained their rank and were not packed off to an active front line unit to do some real service.

Matthews is said to have been a “shrewd businessman”. Compared to many players of the period it is certain he did remarkably well. Much of this is attributable to his personal discipline, rigorous fitness regime, and frugal spending. As to other earnings then some context is needed. Amongst ordinary people and families until consumerism began to take hold in the 1950’s there were long established means of exchange, barter, handing on and handing down outside the monetary system and especially in the agricultural areas and working class districts of towns.

Beyond that a good deal of pilfering was common in many areas of labour as well as “knocking off” items, notably in the 1940’s cigarette lighters and even basic cutlery in engineering works once the piecework targets had been met. During a period of high personal taxation, major restrictions on spending and rationing very many people would search for ways round the system. Consequently between the high ticket illegal and gang activity and the ordinary established non-money trading there was a substantial “grey” area and none of this appeared in the statistics. It only surfaced in occasional government propaganda and the limited number of arrests.

So Matthews and Mortensen were not much different from many other people, save that they seem to have been able to work a few higher ticket deals on a small time basis. This is not surprising; Blackpool was a haven for people like this with its turnover of population and unusual sub-culture. Between the hotels, the jewellery shops and the many pubs there was ample opportunity for moving money. For this kind of business it was one of the places to be. In the late 1940’s it was possible for people who had been factory workers not very long before the war to be walking around in fur coats, wearing good clothes, have pieces of jewellery and have personal transport if they made the move at the right time.

So for footballers of the present in comparison with the past, what changes?