Are We Greeks Or Romans? 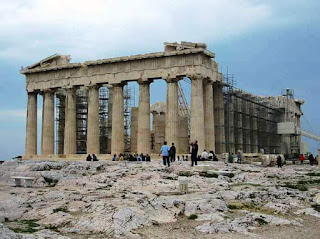 The matter of Greece, its deficits, and the many problems arising has been creating debate. It is not simply the size, impact, implications for the Euro, the EU, and what will happen to government spending that is under scrutiny. One issue is that the Greek tax base has become severely eroded by the almost virtual absence of the top thirty per cent of its earners from the tax system, leaving the debt and its long term liabilities as a burden to the lower paid and future generations.

What has compounded the misery are the revelations that Goldman Sachs (where have we heard of them before?) has assisted the Greek Government to disguise and hide large amounts of their debt by market manipulation through Wall Street and related entities. In short, the EU and the ECB is facing a much bigger problem than they anticipated and one seemingly almost impossible to resolve without the hurt being distributed.

This is nothing new it appears. Zero Hedge dot com in a post on 13 February 2010 by Tyler Burden print an article on Scribd titled “”Exclusive: The Bank of England engaged in flagrant gold manipulation in the Inter War period via the New York Fed; Does history repeat itself?” At first sight this might seem arcane and historical with little relevance to the present. It is certainly a challenging read. The upshot though is that between 1925 and 1931 the Bank of England engaged in manipulating the gold, capital, and currency markets and data and the falsification of information with the criminal complicity of the New York Fed.

In the past many have been critical of Churchill’s record as the Chancellor of the Exchequer in this period and the overall handling of the economy by the successive governments. It now seems the governments were being lied to and did not realise what they were actually doing. The effect was that whilst appearances were being maintained to promote confidence in sterling and UK reserves in effect the Bank had created an essentially deflationary situation before the 1929 Crash with the help of the New York Fed. So our politicians fell into a bear pit.

There is another implication to all this. Keynes published his “General Theory of Employment, Interest and Money” in 1936. He would have been ignorant of this falsification when he was doing his analysis of what happened and why. Galbraith too would not have known when he examined the Great Crash, and nor would others. In short, through no fault of their own and allowing for the integrity of their work and of the value of many of their insights a good many economists relied on falsehoods.

How long this went on after 1931 and in what form we do not know but it seems that it is possible that the UK in the 1930’s went on with its Imperial mission and into a World War on the basis that it was materially and financially stronger that it really was. Whether Keynes came to realise by the mid 1940’s that the world was going to be a very different place afterwards and what economics might then be needed we do not know because he was not able to publish any revised thinking.

Where are we now in 2010 in the UK? It is not just the Greeks that may have been economical with the truth it is others. Also it is not just being economical it is being recklessly spendthrift. Some of our masters would not know a truth even if it punched them on the nose. In our machinery of government now we have three times more people manipulating figures and information and spinning than we have troops in action in a bitter war in Afghanistan.

Many of the official figures are a travesty of statistics. The City and the banks are covering their tracks on liabilities as comprehensively as possible. The Bank of England slushes money around and does not tell us exactly what it is about, even if it knows. Perhaps they should all have a holiday in Greece and study the remains of ancient Empires. If Keynes was misled where are we now with the promotion of policies that are allegedly “Keynsian”, although he would not recognise some of the things being done in his name.

The situation is no better in the USA or for that matter China. The gulf between the centre and what is happening out there widens by the day. Few people really know much and fewer can give rational explanations. But now we can be comforted with the thought that none of this is new, it has all happened before. In the UK we did it to keep the Empire going, to keep up the value of the pound, to keep up prestige, and to keep up the status of London in the world in the 1930’s.

Does anyone in government, I wonder, remember what happened next?
Posted by Demetrius at 17:07