Wembley - Its Deja Vu All Over Again 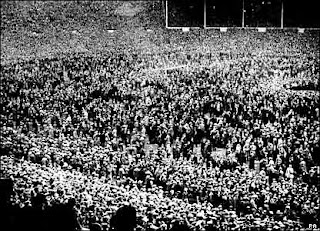 Arsene Wenger of Arsenal has joined the long list of those complaining about the poor quality of the pitch at the New Wembley. He should worry.
1923, the first FA Cup Final, West Ham United v Bolton Wanderers, cockles v tripe. Pay on entry, and no controls over numbers, so too many were admitted. After bringing in the police, some on horses and imposing positive policing (now much out of fashion), the crowd were driven back to the touch lines, and the game was played. That the pitch was not at its best was not a problem, by this stage of the season most grounds had little grass, and a lot of mud.
After the Empire Exhibition, there was then the issue of how to make the new stadium pay. No league club wanted to move in, too expensive by half then, the Rugger chaps were not going to give up Twickenham, and the few international matches would not provide enough revenue. Also, the charges for other games, schools football, and ladies hockey would go nowhere near meeting the bills. So the bread and butter income became the dog track. In 1948 the London Olympics gave it a spasm of fame, and bringing the Rugby League finals there added to it. But the pitch was always, well, not very good, but as typical standards were so low, who cared?
Cup finals were a strange event then. All the fuss was far removed from any other game. There was a stand in the middle where a man waved his arms conducting community singing, songs that you would never sing anywhere else in public out of a sense of foolishness and shame, the culmination of which was the dirge "Abide With Me". I think because it had been King George V's favourite hymn (this says a lot), and we were supposed to love tradition.
The World Cup was in 1966, and at this time some thought was being given to the grass. The dog track eventually disappeared. The trouble then was other big events, pop concerts, and notoriously horse jumping, including some events not long before cup finals. In this new age, managers of teams had found a voice, and some thought the pitch was a horror. I was at Wembley a few times around then, and there was certainly grass, although seemingly laid only the day before by a man, his dog, and a lad.
Now we have a New Wembley, a show piece of the nation and our latest government, at vast expense, going on for £1 billion all costs included. Not just the Cup Final, but the Semi Finals as well, to help pay off at least some of the interest charges on the debts. How is it that the Brit's when building any major project of national standing, make such a muck of it? The Atlantic Isles are covered with grasses, lawns, and utterly splendid swards of the stuff. These days even the humbles of League sides can keep a decent pitch surface throughout the season.
But not at Wembley. 86 years on and the pitch looks cuts up as badly as if a horde of fans, police, and horses have been running around on it. Worse, oh far worse, is that a Frenchman is telling us how to grow grass. To add to the insult, a Dutchman trying to be polite (it never works) tells us, well, on the whole, there is grass, but we should be encouraged by the fact that there are worse pitches in Africa. So England 0 Sahara Sandsurfers 5.
Posted by Demetrius at 13:22