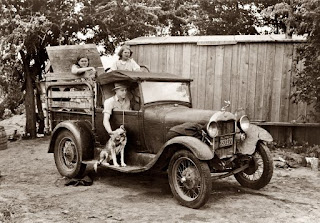 Seventy years ago, during another severe depression, the dispossessed of many parts of the USA and others were fleeing for their futures to California, their bright hope of prosperity and work. The State has grown mightily since, and become home to major activities whose influence has changed the world as we see it. Now, however, it is another story. It may be that the movement may need to be the other way, but where they will all go and to what purpose is unknown.

Whilst we in the UK concentrate on squalid stories of internecine squabbling between the spinners and bloggers, the London Mediocracy at its very worst, there are things out there in the world that utterly escape our attention. There are too many to list, and it is all too complicated to readily assimilate. We rail on about being a world power, and our leaders ramble on about the infinite joys of globalisation, code for supporting the broken City brokers until the very last gasp, but we do not know what is happening. For us in the UK, the USA begins at The White House, and ends at the Beltway.

The USA is Federal, or was. There is talk in Texas and Vermont about secession. In the first case it means losing the Bush family, which is a popular idea, leading many to believe that the sooner the better. In the latter, it would be pity, because it is a scenic homely place, and who wants to lose a State to Canada? But there are other States in trouble, and a great many of them, in short, they have run out of cash.

California, being so large and important will serve to stand for them all. Moreover, with a celebrity film star Governor, and whole communities full of other celebrities, what could possibly go wrong? The answer is everything and all at once. This very rich territory, whose economy is rather bigger than most nations, has a State Government that is broke, and badly so, and unable to print its own money or to balance its books either now or in the future. The same goes for almost all the counties, the townships, the cities. They are all looking down the barrel, only unlike the cartoon characters they will not end up just looking silly, but looking defunct.

The uncertainties abound in local industry and commerce. As for agriculture, so much depends on irrigation, and the water is running short. The water issue could impact on everything. It is also one of the major oil consumers in the world, more or less a petro-chemical state, and deeply vulnerable to any problems there. Last, and far from least, as the TV documentaries keep insisting, the geophysical threats are greater than in most parts of the world. As for global warming, or cooling, take your pick, they are both bad news.

It is the United States of America, our trouble is we only consider the United bit, we forget the States, and it is them, remember each having more self determination than any EU nation state, and nearly all the States are in real trouble. In the past there have been State defaults, so are some more in prospect? California, here we go? It will not be much use for Congress to be singing “How Much Is That Doggie In The Window”, because they will all get bitten, and so will we in the UK.
Posted by Demetrius at 14:46