Diva's, Divinity, And A Night At The Opera 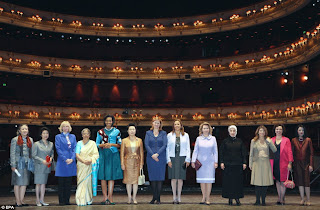 The Royal Opera and the The Royal Ballet are currently doing a double bill of "Dido And Aeneas" by Purcell, and "Acis And Galatea" by Handel. It is an interesting attempt to present two ancient pieces in a modern, multi art form. It may work or it may not. Buy the tickets and see for yourself.

The picture is not of the cast, and the ladies on show are not nymphs, but I suppose one or two could have ambitions to be Queenly in their living arrangements. They are the wives of the G20 political leaders wheeled out to do their duty by their economies and their creditors for a photocall at Covent Garden, The Royal Opera. I hope they were treated to some free fizz in the champagne bar.

It reminds me of the occasion when King George V entertained the King of Sweden by taking him to watch Verdi's "The Masked Ball", the plot of which concerned the assassination of a King of Sweden, but then, His Majesty had to rely on his advisers, knowing little about operas.

"Dido And Aeneas" is about the Queen of Carthage, swept off her feet by an adventurer displaced from his homeland, who then dies in misery when he is persuaded that the Gods need him to get going fast, or else. A wicked witch is at the root of the problems. It is a story of false hopes and deceptions.

"Acis And Galatea" is about a shepherd and a nymph who enjoy forbidden love, only to be destroyed by the arrival of a one eyed monster, Polyphemus, who turns up singing "No Joys Shall Last", and puts Acis into a terminal condition, permanent. Galatea, remembering she is divine turns Acis into an ever flowing fountain. It is supposed to be a happy ending.

HMS "Galatea" was an A Class Cruiser during World War II. In August 1941 Churchill and Roosevelt met aboard HMS "Prince of Wales" to sign the Atlantic Charter. In December 1941 HMS "Galatea" was sunk by a German submarine, and around the same time, of course, the HMS "Prince of Wales" was sunk by the Japanese. Also, on 7th December 1941, the Japanese attacked Pearl Harbour.

Nothing like a nice omen from the classics, is there now?