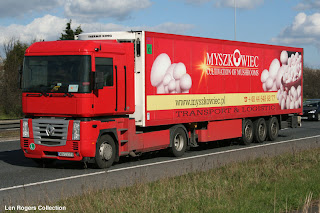 It is sometimes in the idle moments that you learn things. I spend a lot of time in idleness, so I can claim to be a man of learning. With our modern railway stock the art of train spotting is no longer much fun, it is more interesting to wander up to the motorway and lean over the bridge watching the truckers tangle with teenagers out of control, many waving their arms to the beat of the music, mingled with peering pensioners unable to admit that they cannot see quite as well as they used to. It gives me my fix of Schadenfreude on the cheap.

Sometimes we have to drive along the motorway ourselves, and when it the turn of my CEO to take the wheel; we share to keep up our skills; I can do the truck spotting up close. For anyone wanting to show off as an inveterate know-all you need to be able to identify the country and district of origin of every vehicle you encounter, truck or car. It is not difficult these days, and on a boring run, can be set to a plainsong chant just for fun, and to drown out the heavy bass from passing teenagers.

What I have noticed in the last eighteen months or so is the radical shift the balance of numbers between trucks from different countries. This morning, I ran a check on a thirty mile stretch, and the results were intriguing. There were more Hungarian trucks than British, and a lot more Polish ones than Hungarians. In fact the German and Polish were about equal, with the Dutch and Belgians each having a good number of trucks. There were others from across the Balkans, several from Bulgaria, and quite a few from the smaller nations in Eastern Europe. Inevitably, Spain was well represented with a few from France, but not many at all from Italy and Switzerland. Overall; the British were in a small minority, and amongst the lesser nations.

So what? Well, this road is the main route to the Channel Ports, and these trucks indicate the flow of trade and movement that is occurring. So what is happening to the British, and might this be an indicator of what is going on in the private sector of the economy? We already know that the private sector is feeling the worst of the pain, but if the trade with the EU is being affected on this scale then the situation could be deteriorating rapidly. I hope I am wrong, and that the British truckers were in a place that I might expect them to be, that is off the motorway, and having a decent cuppa and full fry up in a decent transport café. The trouble is there do not seem to be any such café’s left round here any more.