We Know Where You Live 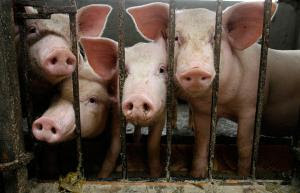 This blog seems to have a thing about pigs. There was a post on Three Naughty Pigs in March, relating to Global Justice, and in February a post on the Economic Theory Of The Day, expounding the Das Fleigen-Schwein Theory that all governments base their economic policies on the assumption that their pet pigs will fly, a belief that is invariably wrong.

Now it has all become very serious indeed. It was predicted, of course, because after the North Carolina swine epidemic of 1998 scientists have known about the rate of mutation of viruses, and the risks inherent in modern intensive factory farming, most of all in poor and overcrowded conditions across the USA and in many other countries.

But with Government and Pharma’ and Chemicals devoted to treatments and cures, with expensive programmes and expenditures, and not to causes or prevention, sooner or later something was going to get loose somewhere. What could not be predicted was just where and just when. Books have been written, talks have been given, but still in the USA, the pig population has gone from 53 to 65 millions in forty years, but the hog farmers down from one million to 65 thousand. Much the same has happened elsewhere, and in the UK.

So for long the Quango’s, Agnecies, NGO’s, lobbyists and companies have been blessed with funds, their shareholders and executives being as happy, well, as pigs rolling in (cough cough) now the (cough cough) has hit the air conditioning. The politicians rush smirking to the TV to claim the wonders of their planning procedures, and men of science, LO!, Sir Hugh Pennington, Lord High Shampoo Sniffer himself! assures us that all will be well, if we take enough petro-chemical based medication.

Unluckily, the dead will not be able to appear on the talk shows, nor will few of the people more seriously affected one way or another by the shambles that is likely to result. We have been told that tourism on the back of the cheaper pound will restore the economy. Not if the mortuaries begin to fill it up it won't. On that subect during the long Millennium holiday they did fill up and the deceased were literally piling up in the cold stores. A big rise in the death rate will impact on the property market. The spinning is already getting more serious by the minute. In the meantime the Ludwig Von Mises site cheerfully discusses the validity of secession by individual states of the USA, 90% of the English want to be rid of the Scots, Iceland wants to join the EU, possibly the day before the Euro system collapses, and around the world a lot of the more recently created nations are looking shaky.

So what is the big deal in the markets? Well, it is said there could be a bull market that will kick start the property market and expansion of credit. They say it will be in government bonds according to many economists and the FT. If you believe that you should try going on a diet of pork chops and bacon butties.
Posted by Demetrius at 17:09