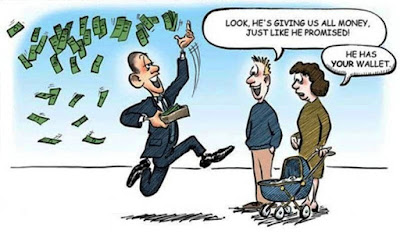 Years ago we found ourselves standing behind that George Osborne sitting at Covent Garden gazing at the spectacle of "Sleeping Beauty".  He, like us, was transfixed at the richness and impact of the staging.  We were grateful for the public subsidy which has helped to retain this kind of thing, but we did not ask George about it.

Now, seriously, I wonder if George was so affected by it all that he has gone into some sort of deep sleep himself where he is in a dream of permanent fantasy where style, effect and drama and all that reign supreme.  If so, we are all paying for it and the paying will never end, simply become bigger and bigger.

Agreeing with The Guardian is not a regular habit, often it is a rare event, but Simon Jenkins on "Squandermania" is something I liked and a great deal.  It is a word that says it all. Cameron is taking a lot of flak at present for being a "Prime Minister Lite", all fine words and fine spin but no substance and while he might get the picture he does not know how to paint it.

But is this a characteristic of too many in the Cabinet line-up.  A few ministers may be grafting in the way they should but they are not typical.  Most seem to be keen on the media work but not on the real.  How far does this apply to George?  Why, with a City of London said to be a centre of world finance does he go running to China whenever a big deal is on the table?

What Cameron and Osborne seem to share with their lightweight colleagues is a distaste for complex and difficult long term issues relating to many areas of policy and of finance and investment.  Because they are in big government they only relate to big projects and big money and cannot see beyond the spending.

Could someone give Osborne a kiss or perhaps better a kick in the pants and wake him up?  It is Cameron's job to do this but he can't.  He might be leaving it to Boris Johnson, in which case it will not be high culture so much as low farce.