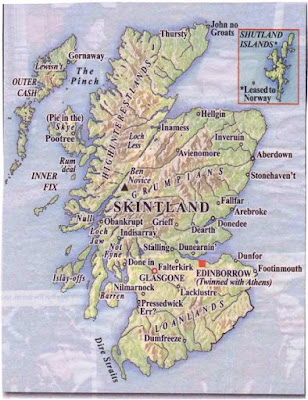 The shrieks of rage have been heard in the mountains and glens as well as the political ghetto of Edinburgh.  Nicola Sturgeon has been rending garments and wild eyed at the appalling insult to Scotland.

Kelvin Calder MacKenzie, an Englishman to the bone in his head mentioned the word "Jockistan" in public.

The event was on the BBC programme, "Daily Politics" and she has called for the BBC to grovel as only the BBC can. MacKenzie has form on failures of his brain to connect with his mouth and other parts on subjects which are sensitive.  One I can think of seems to me to be a lot worse.  But is it as simple as that?

This item on the web is from 19 March and the site is Bella Caledonia, a distinctly Scottish one with extensive coverage of many matters.  Notes From Jockistan is the title.

Later it appears again on 28 April, "Jockistan And The Boat People", this time referring to Kelvin.  So when and where did it originate.  Has it been one of those words used now and again and has been for a little time?  Kelvin is a journalist so may not have dreamed it up himself.

Lurking around the darker parts of memory is the idea that the word was used in the past to refer to a part of Scotland where the Socialist politics of that period were alleged to be corrupt and not nice in any way.

In fact just like some of the places to the East of Europe formerly of the Soviet Empire.  It would be utterly wrong to say where it might have been, only to hint that it was not far from Greenock, also began with "G" and has a much larger population.

But it was around in 2010, appearing in "Rear Party" a services web site and goes back to 2006 on the Army Rumour Service at least.  So there you go, blame the Army again.

Tonight is one for a restful evening, a wee dram of ancestral Islay perhaps and the DVD of "Brigadoon".