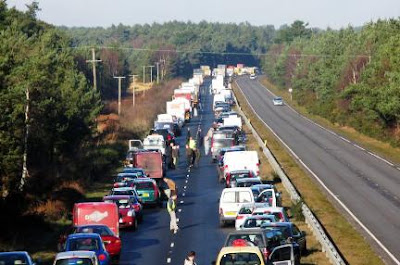 There was a time when quite often we would visit one or other public houses either in our home area or where we were visiting in the UK.  Nipping out to the 'pub was a norm and one way of missing TV or domestic duties.

This Science Daily article is about driving and distraction to the effect that having had alcohol increases the effect of other distractions when at the wheel of a car and so the risks.  This seems to confirm views I have held for a little time now.

We did not drink a great deal, if only for financial reasons, and our level was considered modest at the time.  But with the coming of breath tests and the crack down on drink and driving, even our levels might approach or go over limits.

What worried me was that if caught and convicted what the hit would be on insurance costs and worse if a license suspension occurred the difficulties arising because a car was required for work as a condition of service.  Either walking or taking taxi's was not the same.

In any case pub's were changing.  They needed people to eat meals etc. to survive and the casual passing pint or two customers were less welcome, especially on a busy evening when tables were needed.  Later there were families and children uncontrolled.

One of the major worries about driving when having had a drink or two was other drivers.  In the event of a prang because of another driver, they might well claim to be innocent with the hassle etc. involved.  Having had only a pint might be enough to lose the case.

But cars now are not the same as the cars I have driven of old.  When using a courtesy car from time to time I find it a strange business as ours is now elderly and even then was a very basic model without the latest gizmo's.

It like being cocooned in a sound proof shell but with an interior equipped with many and various fiddly things for this and that, not all necessary.  Moreover even the basic cars now have performance standards and capability of those of earlier decades.

Given a cultural change of many more high risk drivers, lane hopping, weaving about, bumper sticking as well as doing other things with personal gizmos let alone all the car's facilities it is no surprise that shunts and bumps are on the increase and the pileups are now a daily feature of our local motorways.

As well as the alcohol there are other substances now more common and more powerful that affect the reflexes and thinking processes.  So it will not take much alcohol to have perhaps only a marginal effect.

But with the crowded roads and many more drivers pushing their skills and cars to the margins of performance it can only get worse.