The 75th Anniversary Of D Day 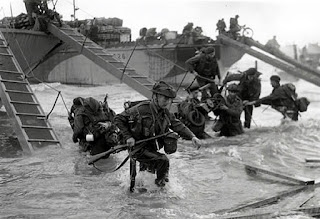 In a few days time it will be the 75th anniversary of the D Day Landings in Normandy that were the beginning of the end for the Second World War in Europe. There is likely to be a lot of attention to this in the various media etc., perhaps too much.

As this blog has been here before I do not wish to add to it. As a child at the time there are now too many personal memories in the mind. Especially, as a few years later I was in the Army serving with men who had been there on the day.

Earlier posts were on Saturday 6th June 2009 "Boadicea And D Day" and in 2014 on Thursday 5th June "Remembrance" and on Saturday 7th June "Durham Light Infantry".

There are few of us left from then to remember but we will.