A Night Out Long Ago 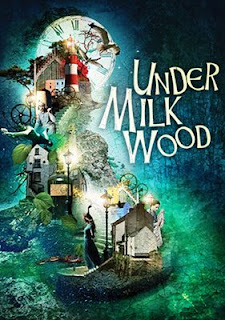 Going on with the "I was there" theme from memories about how you were somewhere that at the time seemed ordinary or would not have any special meaning or interest that decades later is thought to be something special. When I pitched up in London late in 1956 it was with little money to spare so that when looking for things to go to anything free or cheap might be taken.

As a member of the rugby club with a number of Welsh students who had the same issues this meant sometimes going along with the flow. One evening in the bar one of them turned up with free tickets for the BBC Theatre and it was a  TV play broadcast live on the single channel of the time.

It was "Under Milk Wood" and on the 9th May 1957. The author was Dylan Thomas, a poet and man of his time in Wales a man of words in a new way and moreover one of the post war new age. It was lower class, bold in the sex themes and far removed from the plays and poetry of before. His lifestyle matched this. For some time he was famous, first for his works and then for being famous.

Without putting too much stress on how this broadcast began to change things and stimulated new approaches to poetry and drama in its time that evening was a major TV and media occasion. The play's narrator was Donald Houston and it had an all star cast. It was accepted as a new play in new language for this new age.

For me personally, it was of interest but there were many other things to think about then of immediate concern. But several years later that being there mattered in another encounter I had with one of the leading figures of his time in film and theatre is another story.

A few days later, however, I was at reception given at Westminster Cathedral by Cardinal William Godfrey for Catholic students at the major London colleges. There were not many of us. He and I had something in common, being from Liverpool, but were not related.

However, I did not mention "Under Milk Wood" to him.