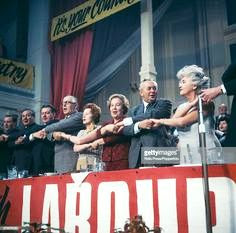 As my 15th Prime Minister leaves office to spend more time with her financial advisers, the choice that has to be made is not a good one. They are a group of "professional" politicians who live in a different world from the rest of us and are as remote as the ancient sky worshippers who used to live up mountains.

My personal experience of them and their predecessors is nil apart from one a long time ago. It was 1967 and we were living in Scarborough when the Labour Party had a conference fronted by Harold Wilson, a man for all seasons. One evening when we were in town at the local history society afterwards we made for the bar of a local hotel. It was not quite full, but there was one table with seats and a couple having a quiet drink, it was as though others were avoiding them.

It was Harold and Mary Wilson. My thirst overcame my reservations and I introduced us warning him that I was a supporter of Liverpool whereas he was an Everton man, by virtue of his local constituency. So we had a pleasant chat about football and things to do with Liverpool past avoiding anything to do with its present which was increasingly difficult.

Then we were about to leave when I wondered if a taxi was possible, given the alcohol limits well passed for driving. He gave one of his security men a nod, who took the keys, drove us home with police cars front and back and sirens going.

It was quite an evening. The following day the our locals were all in a worry about what major crime or something had been committed to bring police to the suburb making a lot of noise at midnight. I said not a word. Their political loyalties were with others than Labour.

It was likely that they would have objected less to having a bank robber in the neighbourhood than anyone to do with Harold.