The Return Of Harry Pollitt 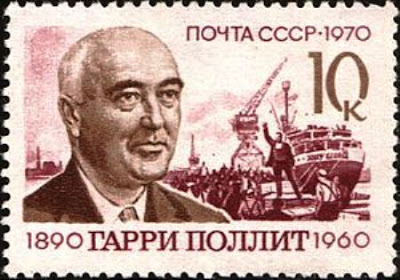 When historians look at the complicated and intricate period of the post World War 2 years often what they make of it is the preconceptions of the early 21st Century. These are not so much from the mass of archives now to be seen or the vast amount of information and opinion on the net.

Things are put in "boxes" or taken for granted. It was not quite like that. A few months after my passing chat with Field Marshal Montgomery in a military headquarters, I was having another chat with Harry Pollitt in the Shaw Library at LSE.

It would seem unlikely to historians that could happen. Harry is one of those almost lost to our history but then was the Stalinist leader of the British Communist Party and then the issue was how much or little influence did he have on the ultra Left groups of the Labour Party.

Harry was particularly involved with the London Dockers and their strikes, notably the 1949 one when the Attlee government was struggling to feed the population, already enduring strict rationing of food. Attlee sent in the troops to unload vital cargoes which the Dockers' unions were prepared to allow to rot in the holds. It was one of worst attempts at blackmail in our history if not the worst.

It could be argued that Harry was among those who cost Attlee his premiership which led to 13 years of Conservative government. At the time there was only one channel TV, the BBC, who did not go near him, much of the press avoided him except to characterise him as a menace to us all. But he retired in 1956 and died in 1960 before our new age began and he was forgotten in the next couple of decades. What was he really like?

I met Harry during the time of Nikita Khrushchev's leadership of the Soviet Union so as well as his interest in British political affairs he was in touch with the divisions in the Soviet Union as Nikita was attempting reform and reorganisation. It was a time for the various groups in Britain on the Left to dispute and spilled over into the Labour Party.

It was at LSE and the rugby club had invited him to give a talk. This may be difficult to understand but as the club had a large number of players from Welsh mining districts it meant that if nothing else he would be well protected from any violence. The talk went ahead without trouble and afterwards a few of us met him.

It was a decade later that Robert Conquest went to press with his revelations of the Stalin Terror in the Russia's and the state of affairs at all levels in the Soviet Union. But what I knew, because I was handling top secret files during my Army time, was that the Soviet Army was far from being what it what supposed to be and were told at the height of the Cold War.

Moreover, East Germany was not the socialist paradise that was being suggested by The Left at the time, if anything it was worse than Britain during the Second World War with the shortages and confusion in supplies and organisation. Harry was in his own kind of political dream world and nothing was going to drag him out of it.

Are we going back to the future?