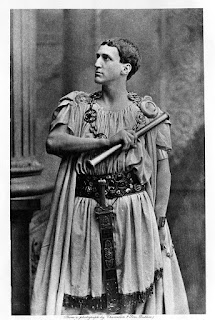 The question was did the Ashton ballet "The Dream" come before the Stratford Memorial  Theatre Peter Hall production of "A Midsummer Night's Dream" or after? The answer was after and the dating as I remembered.

It was much later when we first saw the ballet, but we were at a performance of the Peter Hall production of the play at the Stratford on Avon Royal Memorial theatre production in his 1962 revival of the 1959 one.

This was a time when we often in Stratford and able to go to the Royal Shakespeare Theatre which before 1961 was the Shakespeare Memorial Theatre to see if there were returns or seats available for the plays running.

We saw many and one was "Coriolanus", "thou boy of tears" in a vivid, hard hitting production of a play that dealt with the politics of ancient Rome. It was not for the faint hearted.

It is thought that it was written between 1606 and 1608, a turbulent time in the history of the Atlantic Isles when King James 1st was asserting his authority despite the divisions of ancestry, politics and religion.

A play based on a period in the history of Rome during such a time would have had a great deal of meaning for the London audiences of the period.

Looking about us in 2019 perhaps it is time for the play to return to the theatres of London and Stratford?