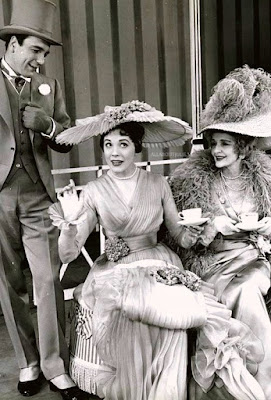 We are told that the world is changing. Yes, it is, and it has always been changing. It is just that in the 21st Century we can see and be told what is going on, where and sometimes why. What we are told because of modern communications etc. often it is possible to check the information and compare sources.

Along with this information there is a mass of material from the past which enable us to find and think about what has happened. We no longer depend on experts, pundits and academics to instruct us and persuade us to their views. The detail of the past might include information on ourselves.

Question. What was I doing on Wednesday 30 April 1958? Is the answer online? It is, I was with Ingrid Bergman, the Swedish actress famed for the number of her lovers. Well, we were at the same place the same evening along with a theatre full of others who were hoping for a good night out.

It was the Theatre Royal on Drury Lane and the London opening night of "My Fair Lady". Tickets were hard to come by, the touts were asking up to £5 each, in those days near a week's wage for some people. The musical, based on the George Bernard Shaw play "Pygmalion", had been a hit in the USA.

There were many British, largely of the upper orders, who thought that turning this play into a musical was too much but the word from New York was that it was something not just different but way ahead of most of what was on offer in the West End at the time. I had my doubts but was open to see what it was all about.

At first the performance seemed good but nothing special. But then Julie Andrews came on as Eliza Doolittle and went into "All I want is a room somewhere...." and I was a gone man along with the rest of the audience and the roar of applause at the end was striking, it was one of those great nights.

Many of us knew exactly what was meant by the room somewhere. We still had memories of the winter of 1947, long and bitter and the coal ran out halfway through it, leaving most of us to freeze. The winters of the 1950's were not as bad, but bad enough if you were in cheap digs in one of the poorer parts of London.

So why was I there? Well, I had been sitting quietly reading the newspapers in the Shaw Library at LSE and the attendant asked if any of us were interested in free standing tickets for the Theatre Royal, a couple of streets away. GBS had asked for some of us to be there, he had been Director of LSE for many years.

My answer was yes, a decision I have never regretted. The next one was being at the FA Cup Final, on the Saturday 3 May when Bolton Wanderers beat Manchester United 2-0. I was tipped off by my local railway ticket inspector that Wembley had some late returns. It is on Pathe and Youtube and I am behind the goal when Lofthouse scored the first.

As a double whammy that we call it these days it wasn't a bad one.