Far From The Madding TV 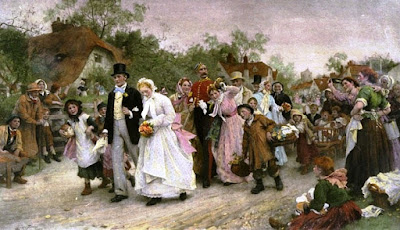 Watching programmes from the "Discovering" series on Sky Arts TV, the content on the subjects has run to about 45 minutes in the hour scheduled. So on Julie Christie, the actress, it gave only snatches of her long and varied career. But the clip from the film "Far From The Madding Crowd", a very 1960's production raised questions.

The first was how near or far from the book by Thomas Hardy (1840-1928)  was it. Another question is when Hardy wrote it in 1874 how far from the reality of rural England in the counties was it? Today we have access to many sources on the web, so whereas at one time serious research was needed, now we can try our luck on the web.

To keep it simple to begin with I found Hardy as a ten year old scholar on the 1851 Census Return so on the grounds that his childhood memories later would be vivid ones what could be learned in relation to the book? He was at a small hamlet, Higher Bockampton in the Parish of Stinsford close to Chichester. It was rural, part of a small parish, but close to Chichester, County Town of Dorset.

The incumbent of the Parish, from 1837 to 1891 was the Rev. Shirley, from a nearby minor landed family who were a branch of the main Warwickshire family of Shirley of Ettington, about five miles from Stratford upon Avon on the Banbury road. As in Shakespeare who must have been there a time or two. Even into the 1960's there were Hathaway's just along the road.

In Hardy's works are there sometime shadows of Shakespeare within the stories and characterisations? The Rev. Shirley was one of the new men of his time, high church and restoring the past, despite the preferences for Low Church or dissenting in the local area. With Shirley came the choir and back to the 16th Century.

There was scarcely an aspect of the young Thomas Hardys life which this change did not affect. Hardy was the first pupil to enter the new Stinsford and Bockhampton National School which Shirley had set up in collaboration with the occupant of the nearby Kingston Maurward house, Julia Augusta Martin. He also instituted a Sunday school, at which in due course Hardy became an instructor, along with the vicar's sons Sewallis and Robert.

In the book "Far From The Madding Crowd" the return of Sergeant Troy to his home village is a major part of the plot, he was a dragoon, cavalry. When Hardy was seven years old, the 31st Regiment of Foot arrived at Stinsford from India, a major event, and stayed from some time. So the Army was an integral part of village life. Then in the mid 1850's the Crimean War saw Dorset become a central part of both military and naval activity.

One interesting item on the Census return was the surname of the Hardy neighbours, Keats. I have tried to race both the earlier families of this Keats and the poet Keats, who died in 1819, one of a London family. I have not found a connection, but in the 1850's people might well have assumed that there was. But having a Keats next door might have created an interest by Hardy.

In communications and history the railways did not reach the Chichester area until the 1860's and after, so Hardy will have been in an area still dependent on the old roads and the implications for local life and contacts. In economic and farming terms it had become a backwater well away from the London markets or any major area of growing industrial or commercial population.

For many of his readers Hardy will have been writing about a world that had been lost and could never be recovered. For in the 1870's and later Gladstone of the Liberals who wished to end the landed classes of the Shires, Disraeli of the Tories anxious for the UK to be the centre of a mighty empire, both saw the decline and loss of rural England to be a necessary condition.

As the new steamships came from distant places filled with foods and other goods and as men moved to the towns or into the Army and the women to service and factories, what was left became a memory. Or the source for a good story teller who could recall what was left of it.

But we shall never really know or understand it however good the presentation in fiction or in our researches.