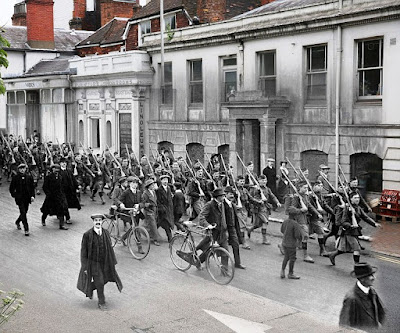 It is said that during the hurly burly of the recent US Presidential elections the Clinton camp let slip a reference to many Trump supporters as people who were the "deplorables".

Essentially, this meant many ordinary Americans of the lower orders who did not like either the ways things had gone under Obama or the Democrats who wanted to succeed him.

In early August 1914 Kaiser Wilhelm of Germany referred to the British Expeditionary Force being sent to France to defend Belgium as a "contemptible little army".

Inevitably the British sense of humour labelled the men who served between 5 August and 22 November 1914 as the "Old Contemptibles". There is a memorial to them in Westminster Abbey.

They may have been few in number but their rate of fire was good enough to stop a German Army ten times their number. The picture above is the Liverpool Scottish battalion of the King's Liverpool Regiment parading through Tunbridge Wells on their way to The Front in 1914.

Many of the political and media boss class in the UK today, especially those of their leaders who style themselves as intellectual, share the Clinton concept of ordinary people. If anything they want those people out of the way.

Perhaps those of us so regarded might take an example from our gallant forebears.

Where can I join the "Old Deplorables"?