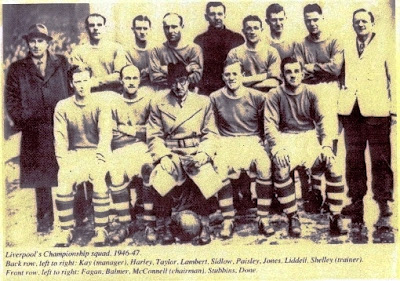 A modern mystery that has exercised the minds of men is the question of how and when Liverpool FC supporters took to chanting "You'll Never Walk Alone" as part of their devotions.  A Guardian article of 2003, little researched, said "Gerry and the Pacemakers" were a key factor but claimed that before then people did not sing at football matches.

The song is heard in the film "Carousel", which came out in 1956, based on the stage show of 1945, which had enjoyed long runs.  It was filled with popular tunes and was very sentimental. One reason the film gained a large audience is that it was one of the early big screen movies with state of the art sound track.

A key date is that in 1962 the BBC series "Z Cars" began, a major police social realism programme designed for a mass audience.  This entailed the BBC having a full production facility in Liverpool.  Added to this the BBC went "Scouse" for working class items.  The Beatles owed their break to a BBC special featuring them.

At the time the BBC had to recover viewing figures to keep the license fee, ITV commanding the market with quiz shows etc.  So on the BBC we had Cilla Black and other Liverpool pop groups, such as Gerry and the Pacemakers who put out their single, "You'll Never Walk Alone" late in 1963 which went to Number One in the Charts and stayed in them for some time.

It was in 1963 when the Everton club at Goodison Park, the other side of Stanley Park in Liverpool, began to use "Johnny Todd", the theme tune of the BBC "Z Cars" programme as an anthem.  They had attempted others which were not welcomed.  A jaunty tune easy to remember, although associated with Merseyside it the  disadvantage of original lyrics that were not entirely apt.  It has remained though despite the programme being long since gone.

At the time the unkind might say that it was only right for the Evertonians to represented by a tune that related to television GBH, assault and battery, burglary, car theft etc. among the lowest orders but a Liverpool anthem had to be more respectable and inspirational.  At least that is my excuse.

It was in January 1964 that the BBC "Top Of The Pops" began, quickly followed in October 1964 by ITV's "Ready Steady Go".  By 1964 Beatle's mania was in full swing.  On July 4 at the premiere of "A Hard Days Night", now hard to watch, graced by Princess Margaret, 10,000 fans gave the London Metropolitan Police a hard time.  On July 10, the Liverpool Police had the worst of it when 150,000 fans welcomed The Beatles back to Liverpool.  There were 300 injuries.

On 22nd August 1964 the first BBC "Match of the Day" came on screen with Liverpool at home to Arsenal and the BBC wanted coverage of the crowd as part of this coup and to present the games as part of their populist programming.

Again, community singing was a norm and had been for decades.  It was common for crowds to sing.  Football clubs very often had bands playing before the game and at half time.  It was usual for a band master to conduct the crowd for a couple of things.

In live theatre variety shows and pantomimes there was usually an item where the audience sang with the words on boards held up.  Coach trips often meant singing, on holidays sing songs were usual, Christmas parties, I could go on and on.

I went to both soccer and rugby matches.  The Welsh in particular insisted on singing.  When many games had lots of fans just out of the pubs there was often desultory singing of this or that.  Leicester City played the Post Horn Gallop over the tannoy when the team ran out.  If a game was boring fans might sing to make the point.

I recall in the late 1950's being at Wembley Rugby League finals when we were given song sheets for the pre-match sing song.  For FA Cup finals there was community singing before the game, finishing with "Abide With Me".  Some of this spilled over into routine games but it was random.  Newcastle United fans sang "Blaydon Races" but nobody else did.

But when TV arrived in 1964 of league fixtures this meant the screening had to be livened up and varied one way or another. Liverpool were in the top flight again rejoining local rivals, Everton. The Kop made very good TV; Scouse bands were top of the hit parade, recently the big one being "You'll Never Walk Alone", so the Liverpool anthem was born.

Might there have been a "fixer"?  Brian Epstein was manager of both The Beatles and Gerry And The Pacemakers, had an inside track into the BBC and  was clever and creative in managing opportunities for his clients.

The Liverpool area had a number of marginal constituencies, there was a General Election in October 1964.  Although not called until 15 September, the talk was in the air and seemed likely after Churchill had left the House of Commons in July leaving Prime Minister Alec Douglas-Home as his political heir.

Given that the Conservative P.M. Alec Douglas-Home was facing the economic problems of the period, the financial uncertainties, the Sterling Area under stress and a bad coming winter with the Trade Unions, notably the dock workers, and the American's had launched into Vietnam it made sense for him to try his luck a year early and it was a very near miss.

I believe that Harold Wilson, the Labour Leader and a local M.P.; who made a great show of liking The Beatles, was in the Director's box at Anfield for that first 22nd August TV game.  Meanwhile, on the Glorious Twelfth of August, the opening of the grouse shooting season, Alec would have been seen on the moors.

It would have made a real contrast in terms of political propaganda.  I wonder if Brian Epstein might have prompted the local Gerry fan's and pop music lovers to enjoy a special sing on The Kop to liven up the game coverage?  One of those accidents of history.

The picture above is of the Liverpool 1946-47 team who I saw play a few times when staying there, when popular music was more Vera Lynn or Gracie Fields; better than the US options of "Smoke Smoke Smoke That Cigarette" or the "Too Fat Polka".  "Oklahoma" or "Calamity Jane" do not quite fit.

But it could have been different as this report on their visit to the USA in 1946 says.  It was felt that the food they ate in contrast to the limited rations at home set them up for the season and had a crucial effect on their strength and stamina.

There is a different look to the team than modern ones.  As for what to sing then there were other options from the further past, but that is for another post on grounds of length.