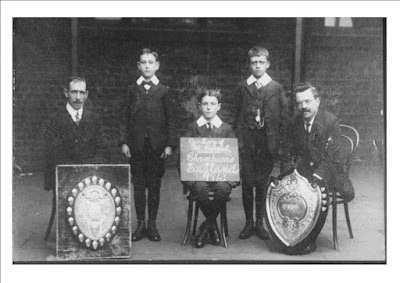 The picture above is one that I do not have the answer to.  It is in Liverpool and the date is 1913.  There is a board claiming The Champions of England with two splendid shields.  But champions of what is the question.

There are two men, one I know, he is the Head of Our Lady's of Mount Carmel School and boys who look as though they might have been useful footballers.  The older man on the right is Hugh Joseph Morgan, the Head, and he was born on 15 October 1865 in Liverpool.  The Laws of Association Football, as we have come to know them, were first laid down in the Freemason's Arms in Long Acre, London on 8 December 1863.

So Hugh grew up with football, all that muscular Christianity was not confined to the Anglican faith, and was prominent in Liverpool schools and football circles.  He had an older sister, Mary Jane Morgan, who married a James Callaghan, and they are said to be great grandparents to the Ian Callaghan, a star of the Liverpool team of the 1960's, when their fans decided that You Will Never Walk Alone.  But there is a twist in the tale.

The mother of Hugh and Mary and their brothers and sisters was Catherine, born Barrett, who was born in the area of Ballina in Co. Mayo, Ireland.  Another Barrett whose family came from that patch was Thomas Augustine Barrett, born 1863 in Southport, in 1871 in Liverpool living in a street adjacent to the Morgan's above.

There were quite a number of Barrett's in Co. Mayo so it is not certain that they were closely related but there are many coincidences.  These arise from those Morgan's and Barrett's being heavily involved in music and the theatre in Liverpool.  One of the Morgan's in fact was resident with Dennis Grannell a leading theatre owner on Merseyside.

Thomas Augustine Barrett is better known as Leslie Stuart, see Wikipedia with the word composer attached.  He became not simply a composer but one of the leading theatrical impresario's of his time with many popular songs and major productions to his credit.

He was Catholic up to a point, let us say that if champagne and the company of chorus girls bought time out of Purgatory he would have gone straight to heaven.  A fellow impresario was George Edwardes, see Wikipedia, whose contribution to the future aristocracy was to introduce The Gaiety Girls to London theatre and Society.

It is a pity that in the search for an anthem in the 1960's that Liverpool were fixated on the pop songs of that period.  Going to the works of Leslie Stuart would have given them a rich and varied choice.

This one might be historically more accurate given that the word "Kop" is short for the original Spion Kop, originating in the location of a major battle during The Boer War of 1899-1902.  This lasts two and a half minutes  However, he wrote other songs any one of which would have served.

Try this one. for example, which gets going after a minute of introduction and also is just a couple of minutes long.  It is a clip from the film "The Way Ahead" about the Desert War in World War Two when his works were still the stuff of sing songs.

My idea though would be to take one of the leading songs from his "Floradora" of 1899 and I ask you to imagine the Liverpool fans taking the part of the men's chorus with the Everton fans, or perhaps Arsenal or Manchester United being the women's.  There are only a couple of clips on Youtube for this.

It begins "Come tell me pretty maiden do, is there anyone at home like you......."

Oh, wouldn't it be lovely?