Shakespeare In Brief And At Length 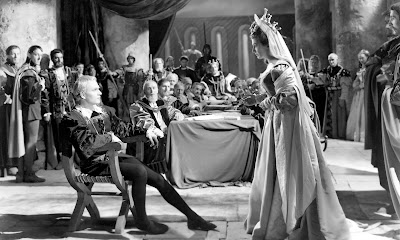 The world of William Shakespeare was a different time, but much of what we are told reflects matters of the present and recent past.  There is some of that world that is lost but a lot that is ignored, often because it is difficult to comprehend or explain or may interfere with the accepted narrative.

This is a lady from the mid 20th Century who was very influential in her field of study. Her handling of subject material and analysis were first class and she was held in great respect by all her students and her colleagues.  For those who had thought the Middle Ages were about wars, dynasties, power and theologies she was the voice of another reality.

What she has to do with Shakespeare is far from obvious.  But the England he lived in was one were the Wool Trade was a key, perhaps even the key, economic activity beyond agriculture.  He grew up in a town that was concerned with it and adjacent to The Cotswolds, then a major centre of the trade and the wealth that it created.

A few days ago an item posted was about Leslie Stuart, a major composer, performer and theatrical impresario of his day, but one of the last of his kind.  It is possible to see Shakespeare as one of the first of these who emerged in the 16th Century and to trace a line of connections between the two.

He was a businessman, an impresario, a writer and composer who was part of a highly complex network of his time and close to the leaders of society.  More to the point, he had his work printed and in the following generations it was possible for the families who knew him to keep alive his name and works.

In a post on 25 October 2011, "Shakespeare, Family And Friends", I dealt with this.  It was long, detailed and very complicated, simply because that was the way it was and few academics or others have attempted to delve into and weave their way through all these families, their marriages and their status.

There was a short post on Friday 23 April 2010, "Brush Up Your Shakespeare" which does not add much and on Sunday 15 February 2015. "More On Tudor Times", I picked up on a key aspect relating to the "Wolf Hall" TV series.

All these relate to the networks, but behind this, there are  the economics of the Wool Trade and it's connected trades, activities and crucially the financial systems of the period.

So much has been written about this period, yet we understand so little.