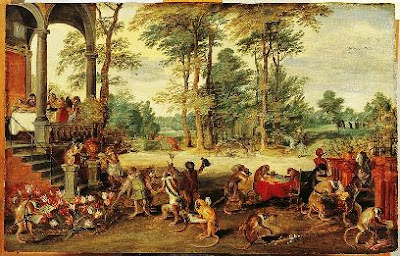 Just a few days ago the singer and entertainer, Max Bygraves, died aged 89.  Amongst his many hits was “Tulips From Amsterdam” in 1958 taken from a 1953 German song based on the Flower Waltz in the ballet “The Nutcracker”.  It was one of those very annoying simple sentimental tunes that stick in the head.

has been a place I have visited a few times in the last seventy years.  The low point was breaking camp at the end of a family holiday to go for the Hook to Harwich ferry during heavy rain and in a stiff wind.  The was a rugby match against in the old stadium.

In the we take little interest in or its affairs regarding the Dutch as a decent but quirky people who are independent minded.  We forget that once they built a mighty empire to rival our own and were not too fussy about how they did it.

Above all they were merchants and not always wise ones.  The Tulip Mania of the 1630’s (picture above and Wikipedia) is well known to economists at least as one of the major and nastiest financial crashes in history characterized as a collective madness.

There has been an election there in the last week and the Dutch will have a new but not so new government, yet another coalition to somehow cobble together some scheme or other to get them over their economic problems.

However, it seems that their financial situation is something of a horror story and worse still the Dutch are amongst those expected to help bail out , , Spain Portugal and the French banking system.  Automatic Earth has a longish but perceptive article about it:

It this article is anywhere near the mark then the Dutch are in deep trouble and like too many others reluctant to admit because it means giving up the goodies they have been used to; notably; a property bubble bankrolled by their government.

With all the doomsters suggesting that something in the Euro mess has to break soon, the question is where?  So while all the eyes are fixed on the southern countries what we may be missing is that could be a place where a crash could be triggered.

The Dutch have done it before with tulips but they could have all our financial nuts in the cracker if their unstable financial and political systems fail.