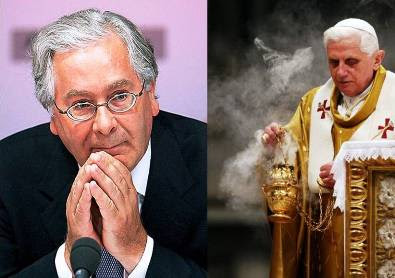 It was they who led the innocent fishermen of Iceland into dread temptation in gaming at the tables of the moneylenders near The Temple in London. Remember, St. Peter The Apostle, predecessor to all the Popes, was a fisherman.

Also, they led the naïve innocents of Colonial Wall Street into sin by the facilities they granted to evade regulation of credit risks in funnelling credits to and fro and causing them to commit the sins of pride as they lorded it over the trusting and uninformed backwoodsmen of Washington DC.

In the meantime, Governor “Merv The Swerve” King of the Bank of England has been in the Old Catholic redoubt of Manchester to admit his “Mea culpa, mea culpa, mea maxima culpa” to the assembled peoples of the TUC. Not quite all, since Bob Crow and his RMT congregation walked out, perhaps in sympathy will all the railway passengers they have caused to walk recently.

The Trade Unions today sometimes remind me of the Holy Orders and lay brotherhoods of the Middle Ages. Theoretically there to do good and to bring the words of the faith, although with different prophets, they can impact on the overall economy in adverse ways that they deny.

At present there are no flagellants but there are extremes who sometimes demonstrate the strength of their faith in the holy places of London and throw themselves on the weapons of the Metropolitan Police.

For Mervyn and Benedict there is an intriguing comparison. It was the sale of Indulgences (hedges against hell) in the 16th Century that triggered the Reformation in Germany. The sales were to provide funding for a spectacular property venture, St. Peter’s in Rome, that had gone financially badly wrong. You paid your money and you got an easy ride to Heaven for eternity.

More recently, as Mervyn admits, we all came to believe in eternal credit and consumer joy on earth as the money merry go round speeded up for reasons almost nobody could fathom but came to believe in with even greater fervour than the peoples of the Middle Ages had believed in Heaven and Hell.

Like the Christians of the first three or four centuries, there was an oppressed minority who huddled together secretly to doubt the existing gods and to question the existence of rich elites and their imperial arrogance. The early Christians, however, might be martyred, more recent doubters have only had to put up with character assassination.

There is a common message that the two can give us and that is that the world has changed utterly. Easy credit and easy living are no more and new empires now rule our world and not the governments we elect and nor the faiths in which we worship. I include secularism as a “faith” because it has its own prophets of doom and reasons for being that are somewhat beyond rationality.

It is probably Mervyn that could try to get over the simple proposition that who controls the supply of money controls everything. I believe that it was Meyer Amchel Rothschild, 1743-1812 who said “Let me issue and control a nation’s money and I care not who writes its laws”. In the UK between 1997 and 2010 the government handed over the creation of credit and effectively the money supply to the financial interests who paid their party and personal bills.

“Globalism”, that is the creation of major international entities not bound to any state and paying taxes where they want to or not at all that are now governing much of what we do. Pope Benedict, leader of a global religion is as much in their thrall as anybody else. He might care to read up on the 1891 Encyclical “Rerum Novarum” titled “Rights and Duties of Capital and Labour” issued by Pope Leo XIII

I quote: “They are reminded that, according to natural reason and Christian philosophy, working for gain is creditable, not shameful, to a man, since it enables him to earn an honorable livelihood; but to misuse men as though they were things in the pursuit of gain, or to value them solely for their physical powers, that is truly shameful and inhuman.”

But I am not hopeful, His Holiness Mervyn might be asked about the money and where it is but what we will get is “Toxic Debt? ‘onest guv, it weren’t me, nobody told me and I don’t know nuffing” more or less that is. Governor Benedict of The Vatican Bank, if asked could well reply “The accounts are one of the greater mysteries of the faith.”

Perhaps the two of them could meet up at Airdsmoss for a chat.
Posted by Demetrius at 14:49