The Democracy Of The Damned 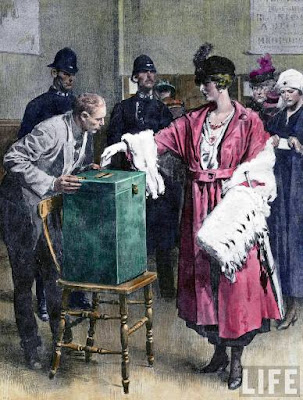 The matter of voting has been part of the week’s business. This morning I was dazed by the idea that I might have a vote in the Labour leadership election. When at work it was necessary to join things and one small group has been swept up into the GMB where I now march arm in arm with the Boilermakers and Sex Workers Collective.

I suspect they will be even less happy than I am.

The union asks me to vote. But which of The Flatulent Five should I vote for? The Famous Five of Enid Blyton number four humans and one dog. I never read her books, Dashiell Hammett and Raymond Chandler being preferred.

However, the GMB suggest Ed Miliband as the man of the moment, the one who I make out to be the dog in question. Something of a Schnauzer, little and uncontrollable, yelps all the time, has a nasty bite, but is vulnerable to a flying kick.

There is something more important, however, and that is the local Electoral Register. It was so simple, pick up the document that came through the door, go online and click for the postal vote, all done nice and easy. But far too easy.

If you have a single member constituency based system whatever the voting procedure then there will be marginal constituencies won and lost by only a few votes. I will skip the long analysis of this. But at the beginning of the 1950’s around twenty tight votes could turn the election.

By the end of the 1950’s it had gone out to about 40, then in the 1960’s returned to being a small number. It was then that the critical nature of a small minority of seats was fully realised and we have had the struggle to control those often at the expense, in the literal term, of everybody else.

There are other ways of jiggling the system of course. One long established has been to make decisions on housing allocations and planning. Another has been to vary the size and nature of constituencies. Quite why the Isle of Wight electorate should be five times larger than that of the Western Isles is a real question.

However, in the past, because of tight local control and knowledge by and large the actual business of voting was relatively reliable and honest. Now it is becoming dangerously open to manipulation and fraud. With the constituency system, you do not need to operate in all of them, only the ones where the swing is critical.

There has been disquiet and complaints recently about events, falsification, impersonation, and above all manipulating the postal votes in some areas. If this becomes more extensive as the temptations increase it could mean that the electoral system we have is no longer an asset but a liability.

When the Government looks at issues of voting this is only a subsidiary issue. The main issue is the integrity of the system as a whole and indeed whether the constituency based form can now be trusted to deliver anything remotely like a democratic and representative result.

Ask yourself which groups have the money, the clout, the organisation and the intent to warp the system in their own interests? I can suggest the drug dealers. You might consider the more unscrupulous corporate interests, foreign agencies or other power groups that now infest our political system. They do not need to attack the whole, only a small and vulnerable minority of seats.