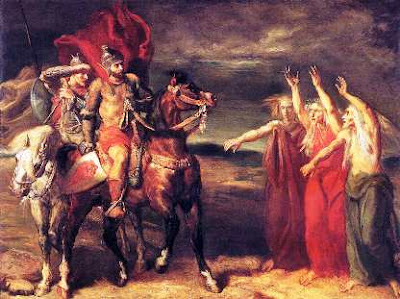 The annual performance of The Scottish Play has now taken place at Manchester Central Station that was. Things did not run according to the timetable. Also, this year we had a dearth of Scottish performers for the lead parts. Ed made an unconvincing Macbeth making sure all the blood was on other hands.

David could not make up his mind whether he was Duncan or Banquo’s Ghost. Either way he may choose to disappear in a cloud of eco friendly carbon dioxide.

Harriet might have been expected to be more convincing as Lady Macbeth but seemed to be auditioning for Titania, Queen of the Fairies in another play. As for the three witches, at one time Labour had a marvellous choice of candidates.

This year I felt that Darling , Johnson and Straw would have to do the parts as transgender social outcasts. Interesting, but not good to watch.

The BBC, frantic for a pretty Labour face to give the spiel without upsetting too many people let Andy Burnham have a large chunk of their news bulletin. As an Everton supporter whose team are bottom of The Premiership and looking bad he may not have been the best choice.

Anyhow, he did try to make us weep for all the dire hardships he and his fellow candidates for the Labour leadership have suffered for the last few weeks. My little heart bled for them.

Burnham predictably went banging on about the NHS and what disasters awaiting the old. This caused my twitch to start up. He represents Leigh in Lancashire. A relation of mine had his father land in Leigh Hospital a decade ago. The man was diagnosed with dementia.

The family had no discussion with any doctor and indeed were denied access to one but were simply instructed by a junior local government official that he was going to put into a care home and his property sold.

The family went to the Court of Protection, see Anna Raccoon’s blogs, to try to sort out the alternatives. Unluckily the relation landed in hospital in an emergency and while he was there the official forced the father, near blind and stone deaf as well as suffering dementia to sign documents authorising the sale of his property.

The Court of Protection did nothing, but we now know that they would not challenge politicians.

As well as selling the property at well under value over the family’s heads the relevant local authority took a large chunk of money as administration fees. This was Wigan, who once had Hazel Blears as one of the legal officers. Of course she will have had absolutely nothing to do with devising these procedures.

Curiously, some of those involved in the buying and selling were attached to local Labour Parties. Gosh golly, and you would have thought they would have been much too busy coining it in from Pathfinder and other Labour redevelopment wheezes.

Meanwhile, Andy told the BBC that the Coalition had produced a “White Paper from nowhere.” about the NHS. This is unlikely unless the Three Witches had been at work for the Tories as well as Labour. Perhaps Andy is clueless about where they come from normally.

Perhaps Andy is clueless because when he was in charge of Health the civil servants might actually have been thinking beyond the next sound bite or appointment at the hairdressers for the colouring and styling.

Perhaps Andy is clueless because he sees the NHS as just a big jobs and property racket for the various members and funders of his party.

Perhaps Andy is clueless because nobody told him that there was something called The Treasury that might be looking for different ways of funding services and that was always going to include Health.

On the other hand, perhaps he really is just totally clueless.
Posted by Demetrius at 16:54