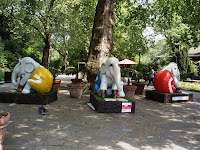 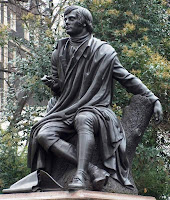 Rolling into London by train on Saturday on a too warm day as we passed over Borough Market there was a large item of recent graffiti saying “Sack Cameron”. Well, that did not take long, although it might have been sponsored by Ken Livingstone.

We thought we would try our luck in the time in hand to see if The Embankment Gardens was clear enough for a sit down. One good shaded spot is under the statue of Robert Burns.

This time as well as the memorials there were beasts of a kind to look at, in aid of the charity for saving elephants across the world. The Statues are being made and sold in the cause. In the picture above the one on the left is staring up beseechingly at Burns and they are all wearing boxer’s shorts and gloves whilst he is looking down with half closed eyes wondering what the hell to make of it.

When we were sitting there chewing through our picnic all the tourists were giving their full attention to the elephants. There was none to given Burns or any to the other memorials apart from Sir Arthur Sullivan further along. It may well have been the lovely graceful nymph draped around his plinth that caught their eyes rather than Sir Arthur. Burns may well have felt some resentment about this.

The memorials in the Gardens have been put in more or less at random. There is no theme or pattern but as it has occurred to those in charge at the time. So just along from Burns is a fine one to Wilfred Lawson one of the major figures in the late 19th Century Temperance Movement. His is adorned with the words “Charity, Peace, Temperance and Prudence”. I wonder how many Burns would have agreed with.

There is a large memorial then to the first Lord Cheylesmore, Henry Eaton, again a major 19th Century military and political figure. A High Tory his family made their wealth from broking in China silks. He married a lady called Charlotte Harman. Burns adjacent to a Harman connection, what next?

A modest memorial to Henry Fawcett is easily missed. Another major 19th Century figure, an economist and polymath who was interested in progressive social reform. He was also one of the leading proponents of Women’s Rights. Burns may have gone along with the economics.

Not far away is a fine memorial to Robert Raikes, the founder of the Sunday School movement, referred to in the time of Burns who was contemporary to him, as Ragged Schools. The educational situation in Scotland was very different to that in England at the time, much to the advantage of many Scots. What Burns might have thought is an interesting question. It is a pity they never met.

Closest to Burns and again under his eyes just visible in the elephant picture above is a fine small memorial to the First World War Camel Corps, a forgotten force that faced severe challenges and who were precursors to many of the later special forces. It is another one that is without much meaning to any of the tourists.

Robert Burns died tragically young, so were are left with only the memory of a younger man. Had he been given an extra forty years, what then? He would have seen the expansion of Sunday Schools into the Elementary School movements. The first developments of the Temperance Movements would have been taking place along with all the many religious revivals.

The growth of Empire and exploration would have brought a great deal of new learning. There was new music, new literature, new science and new politics. What might he have made of it all? Would he have joined one branch or other of the reformers? Or like others might he have become in old age a defender of the established order?

Would he have had a memorial then raised on The Embankment for the tourists to ignore in favour of a charity sales pitch?

So “To An Elephant”

We find ourselves in foreign place,
Fat Chieftain of the Elephant race,
Amongst them all we take our place,
Poets, pachyderms in gloves and shorts,
We neither have a hint of grace,
In any of the tourists thoughts.