A Present For The President 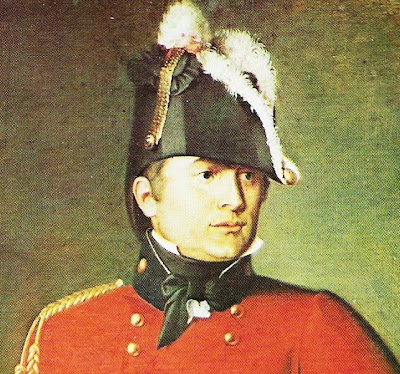 The debate on who or what should occupy The Fourth Plinth in Trafalgar Square on a permanent basis has been rumbling on for a long while now. In the past my views have dodged about from one to another. Once, like others I thought that something other than famous military people from the past should be given prominence.

In a phase where science was in my thoughts I pondered on a group of Watson, Crick, Franklin, and Wilkins who gave us the key insights into DNA. Then from the past I thought of putting Davy and Faraday back together in the public eye.

Now I have changed my mind completely and believe that the occupants of The Fourth Plinth should be in the historical context of the square and should be two men of the period who we have to thank for one of the great British military achievements of the early 19th Century. They are men who served Wellington, who has monuments a plenty, who distinguished themselves heroically in battle and who deserve our recognition.

Now that President Obama has decided to revive America’s ancient enmity to Britain and to seek to destroy its wealth and capability we are relieved of the need to be polite to them or avoid praising our men who served in the battles against this rogue state of the past and present. When I suggested that he would begin to support Argentina, on cue according to The Telegraph, he has done just that.

So The Fourth Plinth should now be given to first class statues to the two men who burned Washington DC in August 1814, Major General Robert Ross and Colonel Arthur Brooke, standing side by side, their right arms raised and carrying torches in their hands. Ross, pictured above, was the commander of the Punitive Expedition to the Chesapeake following unprovoked American attacks on Canada and Brooke was his Deputy. Ross died in action and Brooke then assumed command.

Ross does have a monument at Rostrevor in County Down, he was an Ulsterman, by the Mournes but Brooke has no memorial in either Ulster, his birthplace as one of the Brookes of Brookeborough or England, he was resident in London and the Isle of Wight where he married a clergyman’s daughter.

This would be a statement, at least, that if America wants to exercise a foreign policy on the basis of ancient feuds, then at least we understand them. Also, when it comes to feuds, if America insists on meddling in the even more ancient disputes in Afghanisation, then Britain could pull out of the war and leave them to it.

As a parting gift we could send a copy of the portrait of General Sir William Nott that hangs in Camarthen for them to look at and wonder. He was one of the very few soldiers that came out of Afghanistan with his reputation intact and one of his staff was the nephew of Arthur Brooke.

President Obama might learn something from it.
Posted by Demetrius at 18:04