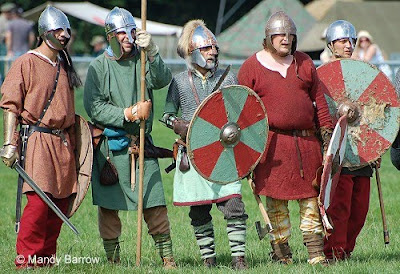 One of the byways of history was that in the late 14th Century before he usurped the throne from King Richard II, Bolingbroke, later King Henry IV spent quality time in Lithuania with his supporters during 1390 and 1392/93 helping the Teutonic Knights impose their vision of Christian authority in Eastern Europe. The lessons he learned were put to good use during his revolt of 1399 and later, by his son, King Henry V on his campaigns in France.

During the Reformation there were close ties between Protestants north of the Rhine and Britain. In any case the extent of trade and contact by those in eastern England and Scotland with Northern Europe and notably the Hanseatic League helped shape the future of the British economy. By the 19th Century the idea of a common Anglo-German history had been around for some time. The notion of England being an Anglo-Saxon people conquered and dominated by a greedy French elite was part of the debate.

Most people put the mutual good will of this period down to the late afternoon of 18th June 1815 when Field Marshal Blucher marched his Prussians on to the field of Waterloo to tackle the French reserves and make it impossible for Napoleon to win. It helped to give the day to Wellington and the hastily put together British and Dutch army who had forced a stalemate on the French. Blucher tipped the scales. Previously, The Kings German Legion became a part of the British Army serving with distinction against the American Rebels and in other theatres of war.

It followed the contacts of the 18th Century when the only senior available Protestant with some sort of claim to the throne was the Elector of Hannover who was duly installed as King George I. Historians tend to regard the Hanoverians as something of a comic turn amongst our various sovereigns, but King George III despite being stricken by porphyria, then regarded as madness, was a man of science and the arts.

The arts earlier had gained not simply from German influence but the strong Italian interests they brought with them. This could have some curious twists. Handel who had been at Hannover arrived in England before King George I with a body of music much of which had been derived from his time in Italy.

Shortly before leaving Hannover he had composed some songs in German. One of the tunes was later borrowed to become the melody of “Will Ye No Come Back Again”, something of an anthem to Bonnie Prince Charlie’s attempt to seize the throne and restore Medieval Catholicism to Britain with the added benefit of the more recent Inquisition.

Charlie, the half Polish plus Italian, French and Danish-German man whose tiny tincture of Scottish blood was marginally greater than that of King George II was not a Handel fan but more one for the Vespers, Te Deum’s, and Palestrina which had fallen out of fashion in Britain. Clearly he had no taste and had to go.

The Monarchy became entwined with most of the German elite and their many Kings, Dukes and Princes etc. After the Hanoverians had run out of legitimate male descendants, Victoria came to throne and bore her family by a Prince of the House of Saxe Coburg Gotha, Albert. He was not much liked but respected for his morals, industry and commitment to progress, the arts, education and all that. His Great Exhibition of 1851 was a tribute to British progress.

He did meddle a little but died too young to do much harm as did the Hanoverians but the absence of an Absolute Monarch or Dictator and the authority of Parliament and The City enabled things to happen. With German music, literature and forms of philosophy impacting on British culture the love in seemed destined to go on for a long while. Germany was not united until 1871 and whilst the Prussians had been a threat to the French and Austrians this was regarded as a very good thing in Britain.

But then in the 1890’s Kaiser Wilhelm II arrived at the top in Berlin with a group of cronies with different ideas, chips on their shoulders about Britain and an ideology and belief in German mastery. The British, in the meantime, failing to invest enough in industry and embroiled in too many adventures felt it necessary to buy off the French.

The installation of King Edward VII, a man devoted to the pleasures of Paris, helped things along. Very quickly Britain was tied into to treaties with not only France but Russia of all people that were secretive as to their purpose and in which Plans B and C were wholly absent. This meant that Britain’s politicians had begun to fall out with Germany although those in the Arts and Culture still loved them.

Germany in the meantime had allowed its foreign policy to fall under the sway of the General Staffs of the Army and Navy and also make treaties that were secretive and in the case of hostilities forced issues. Together with military planning that required rapid mobilisation, again with no Plans B or C and no provision for negotiation the result was World War I in 1914.

By its end in 1918 the idea of German closeness was regarded as treason. The Royal name of Saxe Coburg Gotha was dropped in a hurry in 1917 with the arrival of Gotha bombers over London and Windsor was chosen as the new name to the fury of the existing Lord of Windsor who had not been consulted. Quite why Stirling, a much better name, was not chosen is one of those mysteries. Some Northerners would have liked Pontefract but that was too complicated and in any case the castle was a wreck.

For over a decade after 1918 we thought we had stopped them in their tracks. Then because of a flawed electoral system and economic crisis in 1933 a party came into power on a minority vote that was led by another obsessive nutter with a mad bunch of cronies. These National Socialist Workers Party (Nazi to you and me) ideologues under Hitler were determined to change everything and stamp their authority on everybody and engage in wars for the sake of it. The result was World War II and the end of British Empire and a few other things.

Since then whilst the Germans would have preferred to forget the whole thing and get on with making money and telling people what to do, the British have found it difficult to adjust. Unluckily football is a sport that has attracted too much nationalistic nonsense around the world which is used by the media to hype up the interest and add to the income stream and related sponsorship deals. There are too many ghosts at too many feasts.

So on Sunday who do I remember? My uncle who was at Dunkirk? Or Bolingbroke in Lithuania?
Posted by Demetrius at 17:54