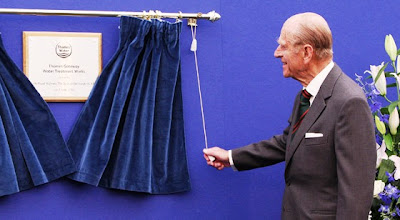 An intriguing contrast was in this mornings light reading. One was the current edition of World Archaeology and the other a press release from Thames Water. The archaeology had a major item by Brian Fagan (see Wikipedia) on ancient remains in Turkey, all the many and various peoples and their forms of civilization that were there once but are there no longer.


Also, there was an item on the Maya culture in the Americans and their advanced use of water systems, also long gone. Add to that an item on the Cro Magnons and the ebb and flow of their population movement in the long eras of pre-history which had a lot to do with water one way or another.


All of this had a great deal to do with water supplies and use and the critical nature of this basic resource. In short, no water, no civilisation and usually no people. It seems that in our Atlantic Isles we can no longer supply our population, notably in the London area from the natural sources of fresh water we demand. We have found it necessary to use the energy hungry and costly process of desalination to secure our supplies.


Moreover, the energy source referred to is Biodiesel. At present more and more UK land is being taken from food use to grow the crops for “bio” fuels. At the same time our Balance of Trade figures are getting worse by the year. If this goes on, it can only end badly, as it has done so often in human history.


Mainland UK's first-ever desalination plant was opened today to provide "seriously water-stressed" London with a much-needed back-up supply to use in the event of a drought. Powered by renewable energy, the Thames Gateway Water Treatment Works, at Beckton in east London, will, when required, turn a mixture of seawater and river water from the tidal River Thames into high-quality drinking water for up to one million Londoners.


Today's official opening, by The Duke of Edinburgh, marks the latest addition to Thames Water's long-term measures to ensure it can meet the demand for water. The ongoing replacement of London's leaky Victorian water mains has helped cut leakage by more than a quarter in the past five years. But that progress on its own is not enough to ensure London will have enough water in a drought. The capital is classed by the Environment Agency as "seriously water-stressed", which means that demand could outpace supply in a long dry period.


With climate change threatening hotter, drier summers and an additional 700,000 people forecast to move to London by 2021, the new water works will be available to help provide the capital's supplies for the future - whatever the weather. The key treatment process in desalination is reverse osmosis, which involves forcing salty water through extremely fine membranes. This tried-and-tested technology is used at 14,000 water treatment plants across the world and has kept crews on Royal Navy ships refreshed for decades.


However, while most reverse osmosis plants have one or two stages, which yield around half of the source water as drinking water, the £270m Gateway works is the world's first-ever four-stage reverse osmosis system, yielding a far more efficient 85 per cent.


The works will only take in water on the outgoing tide, when it is a third as salty as normal seawater and so requires less energy to treat it. Martin Baggs, Chief Executive of Thames Water said, “People may wonder why we're equipping 'rainy' London with a desalination plant, something more often associated with the Middle East, southern Europe or ocean-going liners. But the fact is, London isn't as rainy as you might think - it gets about half as much rain as Sydney, and less than Dallas or Istanbul.


Water is an increasingly precious resource that we can no longer take for granted. "Our existing resources - from non-tidal rivers and groundwater - simply aren't enough to match predicted demand in London. That's why we're tapping into the new and limitless resource of the tidal Thames, fed by the rolling oceans beyond, so we can ensure our 8.5 million customers have enough water in future in the event of a drought.


"The 2005/06 drought was too close for comfort, with only a very wet May saving the day, and we never want a repeat of that. It highlighted what we already knew: additional water sources are needed, as well as a lot more work on reducing leakage, to be sure we have sufficient supplies long-term.

"This new works is a major advance in desalination technology and in UK water resource management. Running it on biodiesel, derived from materials including used cooking oil, will also help us tread as lightly as possible on the environment, on which our core business depends."


David Bland, Chairman of the Consumer Council for Water’s London and South East Region said, "Notwithstanding the obvious cost of building and running the plant, CCWater warmly welcomes the opening of the Thames Gateway Water Treatment Works. The security of the water supply for all users, in all circumstances, is our absolute over riding priority, and this plant will contribute significantly to that assurance at times of the greatest risk to supplies.


"It is a major investment by Thames Water which, alongside the vital programme to reduce leakage in London by replacing the Victorian water mains, will reassure our increasing population that the most essential commodity is constantly available. We congratulate the company on the completion of this facility, a first in mainland Britain."


So how many more desalination plants are we going to require and at what cost? Just how much bio or other fuel will be needed? Does nobody understand that sometime very soon something has to give?
Posted by Demetrius at 15:57