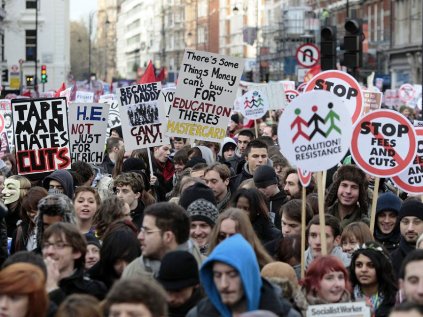 This item on Naked Capitalism today raises the interesting question of how in the the nature of student debt embroils the older generation as well as the younger students.  Given the willingness of the to import the battier ideas from the this one should be coming to us soon.

When people become involved in credit and debt and it goes wrong then almost inevitably trouble occurs, family or no family.  The fact that is might be family and therefore some sort of higher obligation could be assumed may only make it worse.

The potential complications of all this could be hideous.  Imagine a family where the parents have assumed debt liability for one child only eventually when probate occurs any other children or family losing any possible inheritance.  If this includes family who are carers this will add to the flames.

We are already stumbling into a situation where a lot of younger people are looking at an older generation who have done well out of the rampant inflation of the late 20th Century and the easy lending on property, never mind those who have gained decent pensions.

They are looking at the level of the debts they incurred for study and perhaps being gulled into taking on extra consumer debt as part of the bad boom created by the older generation for their own benefit.  On top of that many now have little financial future as the post boom squeeze continues and the jobs market goes sour.

John Mortimer, the late writer, began his career as a barrister specializing in probate and related cases.  It was his view that when it came to wills and inheritance and family money this was the boundary where civilization ended and the survival of the fittest began.

This weekend we are to due to see family.  The traditional game of “snap” we play could begin to get very rough, especially if they realise I am playing with a pack of marked cards inherited from a thoughtful uncle.