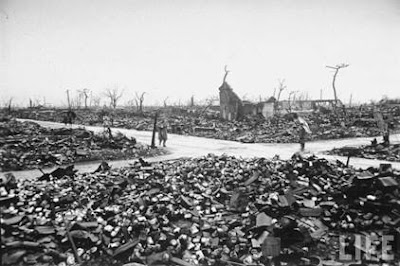 Ed Balls want us to go retrospective, back to the Summer of 1945 he cries, what a wonderful time to be alive!  Or dead, perhaps, an estimate at the time put the figures of at 55 million dead amongst the victorious and the defeated.  Now some think it could be a lot more.

He is thinking of August 20th, 1945 when the House of Commons met for the first time since the July elections, which returned the Labour Party with a large majority to change the nation decisively from the past.

They began the proceedings during the election of the Speaker by roaring out “The Red Flag”, only for him, Colonel Clifton Brown, to observe later, “I wondered whether I was going to be Speaker or Director of a musical show.”  He was more right than he thought because things had already begun to go out of tune.

Only a few days before at the end of July at the Conference at the Allies had already begun to fall out.  By May 1946 Churchill was claiming that an Iron Curtain had been slammed down against The West.  Relationships with the began to worsen, despite all its friends on the Labour benches.

Between then and 20th August, both and in had been Atom bombed and reduced to rubble with surrendering a few days later.  However, some Japanese forces literally did not get the message and fighting continued sporadically in some places.

By August 24th we learned that the Bright New Socialist World was not quite so bright.  Mr. Attlee told the House of Commons that there would have to be major cuts in the imports of food, cotton, tobacco and petrol.  Goods produced for home consumption would have to go for export.

Also needed a new credit deal from the .  But this was not easily forthcoming.  There were strings attached, such as goodbye British Empire and hello the International Monetary Fund and International Bank run by the .  As a large scale debtor nation we no longer called the tune, we danced to it.

Back home by 1946 there would be one million man returning to civilian life and cities either in ruins or with worn out roads, services, utilities, railways, mines and factories.  What was to be done with them all and how could they be found work?  Help For Heroes is difficult enough for a few thousand, but over a million?

Also, it soon became apparent when the camps operated by the Japanese were found that there was a major crisis, largely for military but also many civilians were dying from disease and starvation.  In various ways this was occurring in as well as the full horrors emerged.

Within a handful of weeks, Home Rule for was declared whilst the and the Soviet Union partitioned , leading to a full scale war four years later.  What was not known, but emerged, was that some of Labour’s friends had passed on nuclear secrets to the so that by October 1945 Stalin was ordering his first Atomic Bombs.

In the following years Labour embarked on its command and control of the UK Economy.  The railways were nationalised, leading to a lot of paint being used to rebrand the image, but railways remained much the same.  There was a good deal of tinkering and a few new things but all in the same pattern.  The critical issues were not tackled and key decisions avoided.

Road services were nationalised, assuming that they would always be an auxiliary set of short distance services with some specialist functions.  That went badly and the pilfering there was worse than on the railways.  Quite what damage this did to distribution or to truck production is difficult to estimate.

The miners did have some benefits, but whilst many facilities were improved far less was done for real efficiency in coal production, job protection was a priority.  The dockers on the other hand were quick to show their displeasure at any suggestions of mechanised handling or changed conditions by going on strike in the Autumn of 1945, despite the severe shortages of food.  The Army were called in.

Everywhere there were queues and we were all still in the queues for basics in 1950 and for some things beyond.  It is difficult to explain some of the discomforts, but can you imagine having to wear a hand knitted woollen pair of swimming trunks?  Saving was paramount, old newspapers wiped our rears, string was hoarded.

The National Health Service was created.  Whilst initially it did tap a huge amount of unforeseen needs there were neither the doctors nor the facilities to deal with them.  Key drugs were scarce and effectively rationed.  It took a long while for the new antibiotics to be available for common use.

If Balls and the Labour Party seriously want to go back to 1945 they are entirely welcome.

For those of us who have been there before, please never again.